A year like no other in film history, 2020 has seen numerous releases and productions delayed, along with worlds of exhibition and distribution needing to rethink their business models. As we near the halfway mark of this tumultuous year, the Oscars and other awards ceremonies have decided to move the marker of eligibility windows to allow more films to be considered but as I look back at the first six months of the year and round up my favorite titles thus far, there’s still plenty of worthwhile films to consider. So without further ado let’s begin the countdown…

In a world where the hot-button topic of abortion has been a divisive point of political pull in which the majority of those in power will never have to grapple with the decision their entire lives, how do we shift our perspective to find the empathy towards those that are directly affected by when, how, and who can undergo the procedure? We can start with Never Rarely Sometimes Always, Eliza Hittman’s deeply moving chronicle of a teenager’s struggle to terminate her pregnancy. By steering clear of heavy-handed political messages and naturalistically centering our perspective solely in the mindset of Autumn (a fantastic Sidney Flanigan) through this journey, I simply can’t imagine a soul that won’t be inspired to give a more careful consideration to those in similar situations. (Full Review)

9. The Vast of Night

Andrew Patterson’s The Vast of Night is a marriage of the old and the new, blending effects-aided cinematic showmanship to old-school radio drama. In the director’s sterling feature debut, two 1950s high schoolers stumble upon a strange signal that, they come to suspect, originates from the stars looming above their small-town-USA home. In the vein of Orson Welles’ The War of the Worlds, the film is a tale of potential invasion that plays out entirely over radio waves, and Patterson thus naturally focuses on intently listening faces, and the spoken words that captivate them, as a means of generating anticipation, mystery and suspense. At the same time, his centerpiece sequences are models of formal precision and depth, as protracted shots sprawling fields, through crowded gymnasiums, and in and out of cramped buildings create pulse-pounding mystery and tension while simultaneously conveying the propulsive flow and binding, interconnected nature of narrative storytelling itself. (Full Review)

Where to Watch: Prime Video

It isn’t easy making a film like Driveways stand out. We’ve all seen and walked these streets so often before. We know the twists and turns. We expect the darker corners. Yet stand out is exactly what Driveways does. The movie is a bittersweet coming-of-age story about the international, interracial friendship of an eighty-three-year-old veteran of the Korean war (Brian Dennehy) and an Asian-American boy (Lucas Jaye) just about to turn nine, who arrives into town with his single mother (Hong Chau) and considerable emotional baggage. But throughout in all it’s a film anchored in the poignant, knockout swan song performance of the late Dennehy; an empathetic film of profound gentleness and human decency; a film on the little, shattering details of everyone’s invaluable journey. (Full Review)

Gavin O’Conner is modern cinema’s preeminent sports-drama director, a status he maintains with The Way Back, a conventional but deeply felt story about addiction, anger and the rough road of rehabilitation. The film focuses on Jack Cunningham (Ben Affleck), a former high-school basketball star who, in the wake of multiple familial losses, gets through his construction-work days and wayward nights with a perpetual drink in hand. By means of a job coaching his Catholic alma matter’s struggling team, Jack is blessed with a shot at salvation, turning around the fortunes of his players and, by extension, his own life. Subdued and melancholic, Jack’s journey is a familiar one that could very well have turned into trite formula, and yet O’Connor and Affleck — the latter turning in career-best work — shrewdly locate their protagonist’s alcoholism as the self-destructive byproduct of regret, resentment, fury and hopelessness. Generating emotional honesty and well-calibrated empathy into a deeply sobering and elegantly somber journey of moving recovery. (Full Review)

The darkness is all-consuming, as is despair over a lost past and future, and a purgatorial present, in Vitalina Varela, Pedro Costa’s aesthetically ravishing true tale of its protagonist, a Cape Verde resident who returns to Portugal mere days after her estranged husband’s death. Vitalina wanders through this dilapidated and gloomy environment, which Costa shoots almost exclusively at night, the better to conjure a sense of ghosts navigating a dreamscape of sorrow, suffering and disconnection. Each of the director’s images is more ravishing than the next, and their beauty — along with an enveloping soundscape of squeaking beds, sheets blowing in the wind, and rain pattering on crumbling roofs — is enchanting. Presenting its story through fractured plotting and dreamy monologues, the Portuguese master’s latest is a series of tableaus of lovelorn grief concerning not only Vitalina but also an aged priest in spiritual crisis and another young man poised to endure his own tragedy. It’s all sumptuously rich and singular, filled with one haunting moment and image after the next, bringing plenty of demanding and breathtaking rewards. (Full Review)

Where to Watch: Virtual Cinemas

The silences last a lifetime in The Assistant, a film written and directed by Kitty Green. Starring Julia Garner as the titular character, the film plays out over one long day at an unnamed independent film studio. Light on dialogue with no real score to speak of, we follow our new assistant as she makes the coffee, cleans the dishes, prints the screenplays, and takes the phone calls for the unseen, unrelenting and abusive man in the office behind her. It’s a film about patterns and the interactions it plays on the communities living in and with them. And Green’s methodical portrait of a young up-and-comer slowly accepting the ignored horrors of the everyday office life. It’s absorbing and equally unnerving. (Full Quick Review)

4. True History of the Kelly Gang

In True History of the Kelly Gang, director Justin Kurzel tells the bloody story of his homeland’s most famous outlaw, Ned Kelly, who’s either a folk hero in Australia or a villainous raider, depending on whom you ask. Kelly (played by George MacKay with the intensity of a ferile dog) retells his own story, a harrowing tale of abuse — from the English soldiers who took advantage of his family, to other thieves and robbers, to men sniffing around his mother’s door. Kelly learned to fight back and fight hard. And Kurzel favors stylized images and the occasional anachronistic punk track to provoke such a mood more than faithfully recreate history. And his approach more than works, capturing a dog-eat-dog world that’s bolstered by a strong cast featuring MacKay, Russell Crowe, Nicholas Hoult, Charlie Hunnam, and Essie Davis. With its tactile lyricism and brash punk sensibility the film tackles the lasting impacts of mythologizing through history with a melancholic rebel yell. (Full Review)

Gaslighting gets downright monstrous in The Invisible Man, a 21st-century take on Universal’s classic unseen specter. Helmed with playful menace by Leigh Whannell, whose camerawork weaponizes hallways and corners of rooms for mass tension, this slick genre effort finds Elisabeth Moss trying to convince anyone who’ll listen that she’s not crazy, and really is being hunted by her supposedly dead abusive boyfriend. However, since said predator isn’t visible to the human eye, that’s not an easy task. Hot-button issues emerge naturally out of this basic premise, thereby letting Whannell skip out on overt preaching in favor of orchestrating a series of finely tuned set pieces in which lethal danger might materialize at any moment, from any direction. Avoiding unnecessary diversions or italicized politics, the filmmaker streamlines his tale into a ferocious game of cat-and-mouse, with Moss commanding the spotlight as a woman tormented both physically and psychologically, and determined to fight back against her abuser. (Full Review) 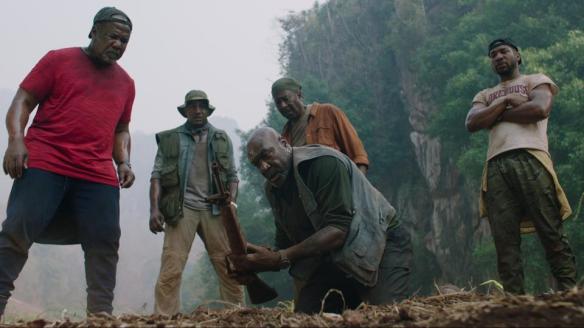 Both of Spike Lee’s films since the election of Donald Trump have been sprawling, urgent, uncompromising and jampacked. This two-hour-and-thirty-five-minute massive swing for the fences is assuredly one of Spike’s most ambitious as it’s basically six movies in one: a heist movie, war epic, nostalgic ensemble drama, tragic character study, mournful political polemic, and shoot’em up thriller. And the result is often breathtaking to watch, whether it be for Delroy Lindo’s incredible performance to the heaping thematic heft of the material to moments of emotional transcendence. The ambition and scope is often staggering, and it remains remarkable, after forty years of making movies, that Lee can maintain this level of energy and passion. And for this he uncompromisingly wrestles with the specters of the past and present, crafting a stirring, anguished, funny, and violent excursion into the dark, rotting pit that is America’s heart. (Full Review)

Where to Watch: Netflix

Dramas don’t come much bleaker than Beanpole, director Kantemir Balagov’s wrenching story about the damage caused by war, and the exceedingly high cost of survival. In a 1945 Leningrad still recovering from the end of WWII, lanky Iya (Viktoria Miroshnichenko) works as a nurse even though her military service has left her with a condition in which she becomes temporarily frozen. Iya cares for Pashka (Timofey Glazkov), the young son of her frontlines friend Masha (Vasilisa Perelygina), and when Masha returns to reclaim her child — only to learn of an unthinkable tragedy — their relationship buckles under the weight of grief, guilt, regret, resentment and need. In its entirety, Beanpole is a film about healing and recovery in a city’s ravaged milieu. Throughout, Balagov spins his characters individual pathologies into a diagnosis of the psychological effects of WWII not just on them, but on Russia in general, conveying the collective horror of a nation forced to do terrible things to survive through the story of two friends asking the impossible of each other. Captured in tremulous, composed long-take handheld close-ups, you’re overwhelmed by the decimated environment and continual push to forge a new future. Yet as difficult as Beanpole can be to watch, it quietly accumulates kindnesses alongside the crueler twists of fate, escaping what would be an unfair label of “misery porn.” All because the questions it’s asking are much more complicated, and more cutting, than what usually comes with such a label. All bringing to mind one of the great Roger Ebert sayings: “All bad movies are depressing, and no good movies are.” Bleak brutality and peeping tenderness come with Beanpole: A film of a slow soul-crushing weight of anguish, repression, and despair that tracks the vast crumbling recovery of war. It’s wholly and utterly breathtaking. (Full Review)

Where to Watch: Mubi & VOD