Robert Budreau’s new hostage drama, Stockholm, loosely based on the true-life Norrmalmstorg robbery of 1973, wastes no time in cutting straight to the bone. By the fifteen-minute mark, the charismatic criminal Lars Nystrom (Ethan Hawke) has already set his plan into motion. Clothed in a black leather jacket, a wig, sunglasses and a cowboy hat, the machine-gun wielding bank robber, with hostages by his side, shouts out his list of demands — a million U.S. dollars, a getaway car, and the freedom of his co-conspirator, Gunnar Sorensson (Mark Strong), who enters the movie before the run-time ticks past a half hour. And as the film progresses Lars’ hostages begin to grow fond of him in an arrays of ways, hence the term “Stockholm Syndrome.”

Calling Stockholm “loosely based” earlier was putting it lightly, as so many things are changed: names, entire character backgrounds and really most of the events that transpire while inside the bank. But in the end, it doesn’t really matter at all. The best thing Stockholm brings is that its passable enough to prove that a much better film could be made from this story. It promises that it’s “based on an absurd but true story,” but this breezy, erratic, and immediately disposable caper leans into that absurdity from the start — from its cast list alone. Hawke’s Lars Nystrom is not much like the actual person at all; his name is entirely different and, for some reason, he’s an American. Hawke delivers a big performance in a small movie, featuring a lot of unhinged shouting. He makes a three-course meal out of every morsel of dialogue, but sadly there just isn’t enough meat on the bone to share with anyone else. It doesn’t take long before it starts to feel like Budreau is at the mercy of a character that he created. Lars is so over the top that he permanently lodges the movie in madcap comic terrain within the first ten minutes, and Stockholm is never able to downshift towards the danger that its wild-eyed antihero is meant to project. 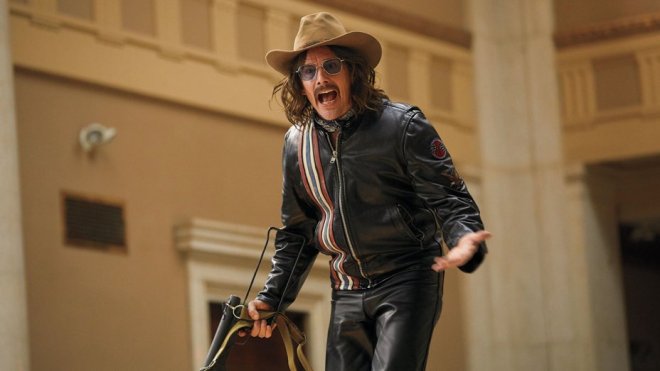 Of the three hostages that Lars and Gunnar take, bank employee Bianca Lind (a completely wasted Noomi Rapace) is a blank damsel in distress, while the subplot about her unexciting marriage is far too underdeveloped to sell us on the sexual tension that inevitably sparks between her and Lars. Or, to be more accurate, the sexual tension that Lars forces onto her. If Hawke were less jaunty and warm-hearted, perhaps it would be easier to think of him as a real threat to Bianca, but even she realizes that the Bank robber would only hurt someone by accident. At one point, Lars even admits that stabbing someone with a butter knife is the most violent thing he’s ever done.

Budreau is an assured filmmaker, and Stockholm gets a lot of mileage from his playful compositions and deadpan comedy. Yet his choice to make the robbery itself so spur-of-the-moment neglects even asking the viewers to invest in it. It at times also feels as if Budreau resents that Lars gets to have all the fun, as the more serious moments that express Bianca’s unexpected warmth towards her captor are brushed over so that the film can get back to the more frivolous business of trying to win the audience over to its side. The bits between Lars and Bianca are so quick and blah that it seems as though Lars is trying to will Stockholm Syndrome into existence. If he can just “Stockholm” her, then everything will be okay. If only Budreau could do the same to us, perhaps taking this strange tale of crime and sympathy above its painfully mediocre level and not making it such a rushed slog.

What exactly makes a religion anyway? Historically, Christian churches have served as community centers for their congregants, provided those congregants conformed to a certain moral code. More recently, thanks to the evangelical movement’s repositioning of itself as the “moral majority” in the wake of Roe v. Wade, those functions have evolved into something blatantly political, as evidenced by that community’s hypocritical embrace of Donald Trump. So why not take the good parts of religion — the fellowship, the organization — and use them to advance a more liberal moral political agenda, one that values pluralism and bodily independence over all? And as long as you’re fighting back against creeping crypto-fascist theocracy, why not do it in the name of Satan? Hey, he does have some good music.

Hail Satan? chronicles the growth of The Satanic Temple over the last five years, and if the film often feels like a decently convincing advertisement for TST, that might be a more damning commentary on the role of organized religion in our ostensibly secular country than anything else (for what its worth, they don’t actually worship Satan). At a time when evangelical groups are effectively attempting to retcon America into a Christian nation — a time when they’re eager to support a clearly godless man like Trump so long as he pledges to advance their otherwise inflexible beliefs — there’s an urgent need for a sociopolitical opposition, and that’s exactly what The Satanic Temple exists to provide. Members don’t worship the Devil, sacrifice virgins, or murder innocent people; in fact, they don’t murder people at all. The Temple’s co-founder Lucien Graves might dress in all black and use an ominous pseudonym for protection, but his group floats virtually above all of the fear-mongering stereotypes that provoked the Satanic Panic of the ’80s and ’90s. It embraces Satan as the divine embodiment of the rebellion against tyranny, and so it’s easy to understand why this growing community might be especially attractive to queer people and social outcasts.

Director Penny Lane brings an unmatched ability to Hail Satan?, an ability to strike the right balance between anger and absurdism, and frames the Temple in a revelatory moral light. She recognizes how small moments can shake a person’s faith in the arbitrary values (one of her talking-head interviewees recollects a Sunday school teacher telling him that Gandhi went to hell because he wasn’t a Christian), and knows when to sink her teeth into the bigger picture of it all. It’s a film with many villains, Arkansas State Senator Jason Rapert emerges as the big bad when he gets into a grudge match with Greaves over a public monument to the Ten Commandments, at which point Lane backtracks through time to illustrate how the Temple’s liberal values have a longer, deeper history than the pop conservatism of a movement that takes most of its cues from Billy Graham and a Charlton Heston movie (which later on its revealed that the said monument was actually just a promotional tool for, nothing government appointed). As is often the case in Hail Satan?, context helps clarify that Greaves and company are more than trolls, and how such visible grandstanding might be the only way to expose the ways in which the most insidious and anti-America are the ones that wrap themselves in the flag and hide in plain sight.

Start-up culture is seen everywhere nowadays, and it can be all too easy for a good idea to be corrupted by its natural appetites for growth. How do you fight the power without being seduced by its strength? How do you preach a creed of tolerance without becoming intolerant of those who won’t listen? Lane could make an entire doc about the former Detroit branch leader of the Temple Jex Blackmore, who causes the Temple’s most dramatic internal division to date when she calls for a presidential assassination during a performance art piece. But Hail Satan? is more interested in the need for an opposition than it is in the means required to sustain it, and so it leaves us a bit uncertain as to where things might go from here. The film’s conclusion without a clear victory, could read as anticlimactic, and, sure, the third act does begin to get redundant. But in reality, it’s an ending in line with a congregation whose history is still being written with every new member or demonstration. Even if it doesn’t end with an explicit call to action like most of the horrific faith-based movies do, Hail Satan? may well bring some new followers into the fold.