SPECIAL NOTE: Sorry for the late review, I was out of town and couldn’t find a way to see the film. With that said though, I’m back now and have seen The Lion King and I’m ready to dive into it!

As Disney seemingly won’t stop burning through their catalogue of animated classics, they’ve continually failed to justify why these new versions need to exist beyond “name brand is a low-risk, high-reward way to cash in on all the nostalgia.” These movies make a lot of business sense, but as far as an artistic justification, there’s not much there for most of them, especially in Jon Favreau’s photoreal adaptation of The Lion King. The template for these movies seems to be to deviate as little as possible from the original narrative right down to dialogue inflection and shot composition, add in a weightless scene or two, and lard it up with expensive CGI. The Lion King hopes to stand apart by resting on its technical achievements, but the photorealism ends up being both the film’s greatest strength, and its greatest weakness. The very few moments where the film is able to break free and show some spontaneity, pretty much just the scenes with Timon and Pumbaa (Billy Eichner and Seth Rogen), are when it shows brief moments of life. Most of the time, though, Favreau treats the original like holy text and refuses to create an identity of his own.

Not unlike many of these Disney rehashes, the plot for The Lion King is exactly the same as the 1994 original, many sequences also being nearly shot-for-shot the same. But unlike the rest of the rehashes, The Lion King isn’t live-action: Favreau has made a fully photoreal animated film working overtime to disguise itself as an episode of a National Geographic show. Most often, the CGI animation is so photoreal that it sucks away the character’s personalities. Simply because the movie is taking its realism so seriously that it forgets that many of these animals in real life don’t have very expressive faces, especially Lions. So most of the time, we’re really exploring the uncanny valley and not Pride Rock. 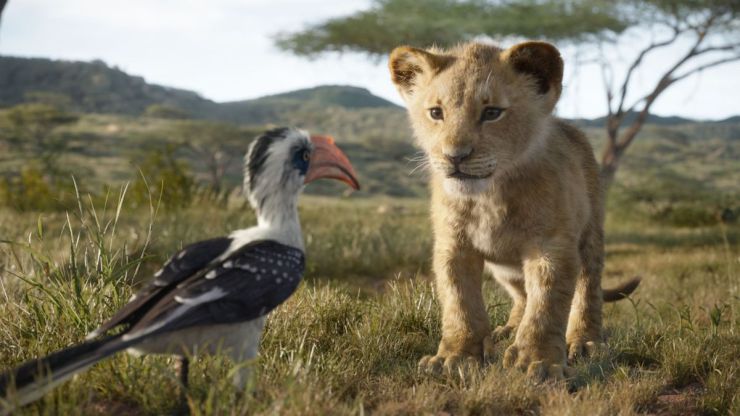 It also doesn’t help that along with the cold expressive-less faces, many of the voice performances are quite weak and delivered very flatly. As many know, there comes a point that a grown-up Simba (Donald Glover) is reunited with his childhood friend Nala (Beyoncé). But when the two launch into “Can You Feel the Love Tonight,” (which for some ungodly known reason takes place during the daytime, somehow everyone involved overlooked that) not even the actors’ lovely singing vocals can bring these dead-eyes felines to life.

Though much of the casting is solid on paper, much of the actors themselves are underutilized or don’t deliver. Alfre Woodward is barely given a chance to register as the voice of Simba’s mother, Sarabi, which is all the more evident when the mighty James Earl Jones shows up to reprise his iconic role as Mufasa — most every line still feels like a heavenly roar. Chiwetel Ejiofor is a decent Scar, yet his reluctance to sing cuts the character off at the knees. Though the other supporting characters are a mixed bag, Simba’s eventual sidekicks are once again the life of the party. Seth Rogen’s carefree chuckle and natural flair for self-deprecation make him the best possible Pumbaa, while Billy Eichner reveals his talents as the newly theatrical Timon. Yet Favreau struggles in finding a way to enliven a should-be-showstopping “Hakuna Matata” — it, like most of the film, comes off a little cold — but the actors’ chemistry still manage to strike a spark. 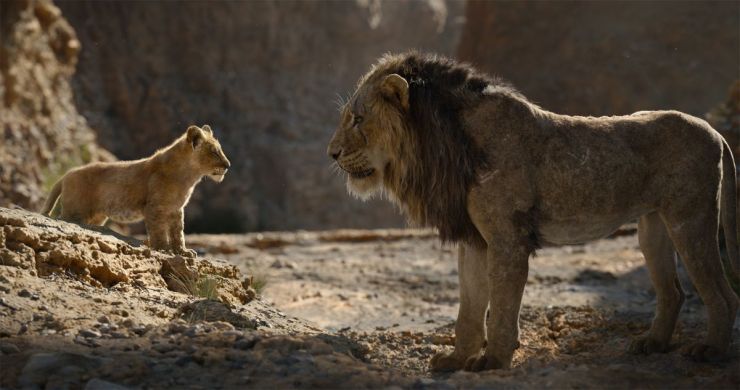 The film also suffers from being far too reliant on the original, in that it never finds its own purpose to exist. The best characters here are the comic relief ones, Timon and Pumbaa. Their spontaneity is like water in the desert of worshiping the original. You can have Donald Glover say all the lines from the original and have the CGI Simba go through all the movements, but it all misses the nuance and style the original Disney animators brought to the 1994 original. It becomes less of the circle of life, and more like a creative dead end.

The Lion King really sinks to the bottom of the barrel like many of these rehashes. The film suffers from failing to improve upon or even decently differ from its originator. Sure, you could argue that this might “introduce” The Lion King to a new generation, but that assumes what kids today want are photorealistic animals with cold, frozen faces rather than 2D animation that can emote and conjure feelings. Yet, maybe that’s true. Beauty and the Beast made over a billion dollars and Aladdin is approaching that billion dollar mark as well. Which is great if you’re a Disney shareholder. But it’s a bummer if you’d like to see the wealthiest studio do more than regurgitate its brands. While the visual effects work is impressive, The Lion King is ultimately a lifeless rehash. A self-portrait of a creatively vacant, greedy conglomerate slowly gnawing itself to the bone.