Stu is an Uber driver. Movies and movie titles have sprung from worse premises, and so now we have Stuber, a buddy action-comedy that stars Kumail Nanjiani as Stu and Dave Baustista as Vic, a belligerent L.A. cop he gets stuck with for a noisy, very bloody ninety-three minutes. If only the results were half as elegantly stupid as the title itself.

In the opening minutes of Stuber a question arises: How exactly do you screw up a set piece as foolproof as Dave Bautista versus Iko Uwais? Uwais, an astonishingly athletic and limber Indonesian martial artist who starred in The Raid, has been wasted in multiple American movies before — he was given nothing to do on the Millennium Falcon in Star Wars: The Force Awakens, and was asked to play second fiddle to Mark Wahlberg for crying out loud in Mile 22. But he’s probably never been inserted into a fight scene as borderline-incoherent as the apartment brawl that opens Stuber. The sequence is so tightly shot, hectically edited, and mediocrely choreographed that it could just be about any two actors trading blows before the violently shaky, jerky camera. Ultimately amounting to more of an aesthetic crime, if anything else. All together the sequence renders the talents of the two physical specimens to obsolete nothingness. 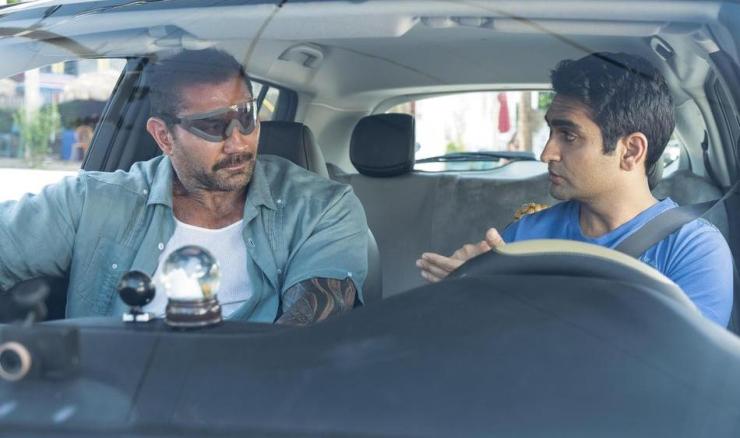 You can usually forgive a little sloppiness in an action-comedy, provided that laughs are delivered. Though Stuber does have its funny moments, for the most part, its pretty negligent in the chuckle department. The film centers on Nanjiani, who’s seemingly chasing his starring role in The Big Sick with another mild-mannered, sardonically dorky Uber driver. His Stu ends up in a Collateral-like situation when his newly leased Prius is now commandeered by Vic (Bautista), a hulking, workaholic cop still hunting the bad guy (Uwais) who killed his partner (Karen Gillan) six months earlier.

The casual mayhem and rapid dialogue seem to position Stuber as a throwback to a different era of R-rated Beverley Hills cops and mismatched partners trading racially charged banter. But this is very much a 2019 studio comedy, which means that our heroes’ misadventure doubles as a self-help seminar. The script, by Tripper Clancy, positions Stu and Vic on opposite ends of a modern masculinity spectrum, creating a false equivalency between Stu’s beta-maleness and Vic’s emotionally withheld Neanderthal routine. Turns out — in no shock at all — that they can learn from each other, Stu working up the courage to profess his feelings for his best friend and prospective business partner (Betty Gilpin) while Vic becomes a better dad to his disappointed Sculpture-artist daughter (Natalie Morales). In execution, the duo’s inherent polarity is a bit of a bet hedge: We’re allowed to “enjoy” Vic’s head-cracking disregard for due process because Stu is around to self-consciously comment on it, his wokeness a shield against criticism.

Yet, Stu’s righteous pushbacks against Vic also don’t really add much in the fact of it all. In truth, Stu’s presence doesn’t really rebuke Vic’s attitude so much as sanction it, granting the movie license to sink to the same level of crude, clubbing hostility. It’s not the clumsiness of the filmmaking that rankles so much as the hypocrisy. And though the story is still trying to take on toxic masculinity throughout the film, Clancy’s script frequently loses focus and concentrates too much on lazy, blah jokes and nonsensical plot points, rendering the message to become very muddled and ultimately confused. With it all only becoming clear in the final few minutes, when it’s spoken out loud by the two leads.

Really, though, what this whole film is, is a big waste of talent. Bautista, who’s great as the simple-minded Drax in the Marvel Universe, has been given no shades to play in Stuber. His Vic is lumbering and not really full of humor, less of a straight man than just an unsympathetic dick, at times. That then puts the full responsibility of the joke delivery on Nanjiani, and while the comedian scores a few decent wisecracks, he spends a majority of the runtime wearied, screaming and quipping at a scene partner who doesn’t give much back. But the few moments he does you feel the movie thrive just for that minute or two. Bautista and Nanjiani’s chemistry is decently solid, but it just simply can’t save Stuber, as the movie buckles under its weak action sequences and a low laugh count.