Crawl, the new film from director Alexandre Aja, is more than a movie about a young woman trapped in a crawlspace with a big alligator in the middle of a hurricane, it’s a heaping scream of existential despair. An insane amount of things go wrong for the protagonist over the course of this seemingly simplistic horror movie that it rises the film above its genre origins and transforms it into something much more interesting. Murphy’s Law wasn’t exactly written with man-eating reptiles in mind, but after watching Crawl I can’t help but wonder if maybe it really should have been.

The film centers on Haley (Kaya Scodelario), a swimmer at the University of Florida whose father has gone missing at the start of a Category 5 hurricane. Haley drives into the thick of the storm, only to find her father Dave (Barry Pepper) disabled in the crawlspace under his house with a gigantic bite mark on his shoulder. As Haley tries to drag her father to safety, and as the winds pick up outside and the water levels rise around them, she’s attacked by an exceptionally large alligator, who then completely blocks their escape. It takes all their effort and creativity the two can muster up to figure a way out around the beast, but as soon as they do they discover an even bigger problem. 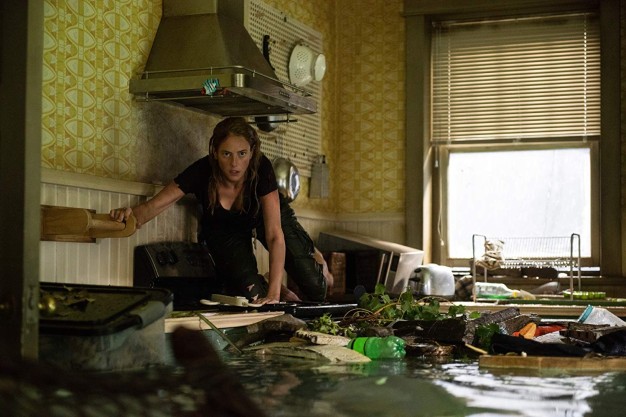 Crawl‘s premise is so incredibly thin it’s almost hard to imagine there would be enough material for an entire feature film, but Aja — cowriting the script with Michael and Shawn Rasmussen — find numerous ways to make Crawl more complicated at every turn. There’s nothing that happens over the course of this movie that goes perfectly to plan, and every time Haley and Dave are able to change positions throughout the house, signal for help, or reach their cell phones something completely unexpected and awful happens, and makes their already impossible situation more life-threatening and difficult. Crawl evokes the same exhilarating sense of hopelessness that often appears in the best Sam Raimi movies, and it comes to no shock and makes complete sense that Raimi is also the film’s producer. Crawl isn’t as shockingly violent as some of Raimi’s movies, but it does have the same twisted sense of humor, as though the filmmakers were giggling like a bunch of maniacs every time they came up with a new way to ruin Haley and Dave’s plans.

Of course, to make room for that nervous laugher intensity, the filmmakers also stripped the narrative fat off of Crawl until, frankly, there wasn’t much left. There isn’t an ounce of filler in Crawl. Haley and Dave’s personal baggage with one another is incredibly flimsy and easy to resolve, but if this film was full of subplots and nuances then the sucker punch sensationalism probably wouldn’t have come across. It’s an interesting example of seemingly obvious storytelling “flaw” that actually improves the entire experience. 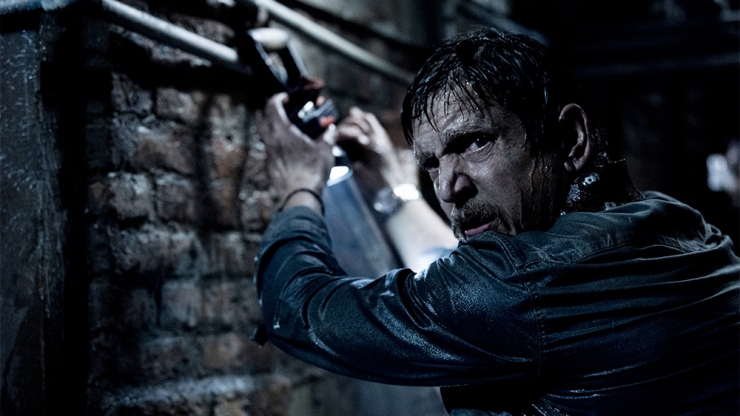 Barry Pepper turns in a fine performance as a failed husband and father who, honestly, doesn’t feel like he’s really worth saving. But this is entirely Kaya Scodelario’s film, and she captures the audience’s attention for its entire runtime. On paper, her character seems simplistic and at times her character is given some weak dialogue, but Scodelario turns Haley into an inspirational horror hero. Haley is fantastic because she’s not just fighting the elements, and not only fighting man-eating alligators, but because she’s seemingly fighting against an entire world that actively wants to destroy her. Watching Crawl is like watching someone fight back against the personification of death in the Final Destination movies. The odds are spectacularly against them and yet, somehow, through her strength of conviction if nothing else, we think Haley might actually have a chance.

Crawl is a tense, crowd-pleasing, popcorn-slinging movie that has its clichés, but thrives with its lean, mean runtime. But in the end, whatever meaning you’re able to wrench from it, Crawl is undeniably also just a killer alligator movie with very modest ambitions. It’s not aspiring to be something that’s awe-inspiring, but it’s about as good as a movie of its kind can possibly get. It’s easily one of the most pleasant, unexpected genre films of the year so far.