Midsommar, the sophomore feature from Hereditary writer-director Ari Aster, unfolds within a remote village in northern Sweden, a land where the sun never completely sets. The place doesn’t look especially threatening, in its rural summer-camp splendor, and neither do it residents, a community of calm, welcoming, very Swedish hippies, decked in white garments and garlands, smiles plastered everlastingly across their faces. Audiences will, of course, know to instinctively distrust them; in a horror movie about a cult, the true believers often come on friendly, to better lure sacrificial lambs to the slaughter. But in Midsommar, that mask of holistic kindness never entirely slips away, even when the bloodshed starts. And that’s a big part of the movie’s black magic: It makes madness look like an extension of the commune’s blissed-out worldview, a sort of benevolent malevolence.

The story begins with Dani (Florence Pugh) in a panic at home, as a personal emergency swiftly spirals toward its worst possible outcome. She seeks comfort in the aftermath from her boyfriend, Christian (Jack Reynor), and is perhaps too shaken to realize that he was on the verge of ending their four-year relationship. Christian feels obliged to stay with her, at least for now, which is the only shred of decency Aster is willing to grant Christian, whose handsome face and reserved demeanor conceal a selfishness that can easily be mistaken for sensitivity. Christian looks like optimal boyfriend material next to his unsympathetic grad-school buddies Josh (William Jackson Harper), who’s steadily focused on writing his thesis paper on ancient folklore, and Mark (Will Poulter), who seems to be pursuing a masters in douchebaggery. The three of them have made plans to travel with a Swedish-born friend, Pelle (Vilhem Blomgren), to his ancestral village for a midsummer festival that occurs every ninety years. Christian, feeling a sense of guilt and obligation to Dani, invites her along, to Mark and Josh’s barely concealed irritation. 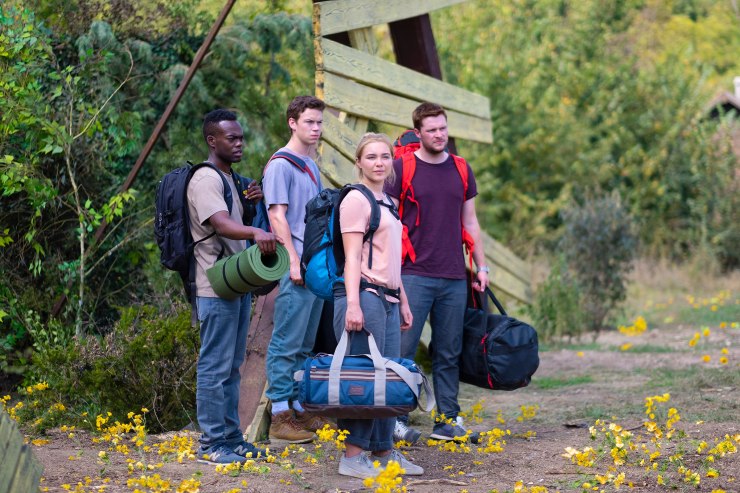 If you think you might be able to guess what’s coming next — numerous logistical nightmares, irritable “bros before hoes” arguments — you are in for the first of a few carefully spread-out surprises. In Pugh’s quietly astonishing performance, she delivers Dani’s sheer intense grief, even when it’s hidden behind a reassuring “I’m Fine” smile. But with all the raw, physical intensity that Pugh brings, she’s been given a much sketchier character to play than Toni Collette was in Hereditary. Yet it’s still that “I’m Fine” smile that is palpable enough to keep everyone else on decently good behavior and the tense group dynamics are suspended, at least at first, by the groups introduction to the weird splendor of the gathering that awaits them — a sensational spectacle that cinematographer Pawel Pogorzelski captures in a series of breathtakingly composed and choreographed images.

The midnight sun bears down on a green landscape scattered with man-made structures — a pyramid-like yellow house, a sun-like gate entrance to the commune — that are at once charming and faintly sinister. Their hosts, known as the Hårga, wear flowers and white robes embroidered with mysterious symbols, and they go about their daily tasks with a strong devotion that feels more tranquil than severe. All-natural hallucinogens are consumed, long silences occur and only after a while is there any shedding of blood. If Hereditary operated as kind of a gauntlet of external and psychological terrors, Midsommar modulates its intensity: It wants to creep under your skin, not constantly jangle your nerves. The film builds the entire world of the Hårga and slowly envelops us in their rituals. Their customs and artifacts are of great scholarly interest to Josh and Christian, and Aster and his production designer, Henrik Svensson, approach this fictional cult with astonishing detail and obsessiveness. The extraordinary visual scheme that Svensson brings isn’t big on explanations but as you study the exquisite runes and paintings, some of them set to Bobby Krlic’s euphorically dissonant score, you will be swept into a world that seemingly exists outside time.

The constant sunlight, disorienting and forever-present, could be seen as a metaphor for Dani’s inescapable grief, which would be unyielding even if Christian were genuinely interested in consoling her. But in a more literal and provocative sense the sunlight suggests a kind of illumination, a new way of seeing. Dani is a creature of the modern world who suddenly finds herself lost in a pagan, pre-technological one, an unsettling change of scenery that is also, in some ways an improvement. The life of the Hårga is built on selflessness. Sex and death, common sources of strong pain and anxiety elsewhere, are here tamed into a collective living environment. Which stands in a stark contrast to Mark’s testosterone-fueled stupidity and a petulant academic rivalry that develops between Christian and Josh, all of which amount to a scornful evaluation of contemporary American masculinity.

Ari Aster, it just simply can’t be denied, possesses an almost supernatural command of dread. He knows how to hold a shot just long enough to create pinpricks of discomfort, to disorient with an abrupt cutaway (with much help from Lucian Johnston’s immaculate editing), to drop stomachs with the godlike perch and glare of his camera. If you’re an Aster admirer you’ll recognize his shivery command of pace and atmosphere within minutes. Midsommar is as deliberate and drawn-out a film as Hereditary, if also, ultimately, a less overtly frightening one — the one or two jump-scares that were in Hereditary are not carried over in this film. Which may sound like a letdown to some, but it is also a sign of Aster’s growing confidence, his willingness to push his austere, slow-burning showmanship beyond the traditional system of cinematic horror.

Aster, who claims to have written this film on the business end of a nasty breakup, structures Midsommar like a kind of unholy relationship study, an “apocalyptic breakup movie” is how he’s referred to it as. At two hours and twenty minutes, Midsommar is the kind of swing-for-the-fences passion project you make when you’re fresh off a runaway success. It’s the kind of sprawl that carries a deranged integrity with it, the same integrity is also seen in the filmmaker’s willingness to embrace the darkest, most unsparing aspects of human desire. But amid scenes of festivities, ritual sacrifice and a bizarre sexual encounter, what you remember most is the remarkable blend of terror and rejoice in Dani’s eyes as she beholds the fate that awaits herself and her companions. Aster’s control is startling, it’s something that should go endlessly praised: With diabolical suggestiveness he keeps widening the gap between Dani and Christian, placing visual and emotional space between two people whose souls have long since drifted apart. In its closing stretch, Midsommar achieves a terrible, apocalyptic transcendence, through an ending that’s frankly stunning in where it’s willing to go in search of catharsis. Madness, we’re reminded, can look like wisdom through the right eyes, or like liberation in the wrong (blinding day)light. For a follow up to the amazing Hereditary, Ari Aster has delivered Midsommar: An ambitious, colorful, unshakable deep-tissue nightmare that haunts you in broad daylight.