In a year that’s only halfway through, audience members would be forgiven for having superhero fatigue after Captain Marvel, Shazam! and Avengers: Endgame. Yet with Spider-Man: Far From Home director Jon Watts and returning writers Chris McKenna and Erik Sommers have carved out a space for Spider-Man that feels breezy and charming, and that fits firmly in the structure of the Marvel movies. Far From Home adds more texture to its characters while also bringing a unique ground level look of the MCU (Marvel Cinematic Universe). Yet again, Peter is wrestling with great responsibility, but Far From Home gives a flavor that really hasn’t been seen in other past Spider-Man movies. Although it does hit some bumps in the road, this movie sustains in a way that I can’t imagine the future of the MCU without this character.

Far From Home picks up eight months after the events of Avengers: Endgame, Peter Parker (Tom Holland) is eager to take a break from being Spider-Man. He just wants to go on a European vacation with his friends and tell MJ (Zendaya) that he has feelings for her. Unfortunately, the trip goes awry when “elementals” wreck the party and Peter is recruited by Nick Fury (Samuel L. Jackson) to fight the creatures alongside Quentin Beck (Jake Gyllenhaal), a hero soon dubbed “Mysterio” who because of the snap has been brought into our dimension from another. Peter not only has to save the world, but also deal with the responsibility of being Tony Stark’s heir apparent.

In previous Spider-Man movies, Peter’s conflict with responsibility was about irresponsibility. If you neglect what you’re supposed to do and only serve yourself, Uncle Ben dies. Here though, it’s not so much that Peter is irresponsible or doesn’t care, it’s more that he wants a little room to be a teenager, and also recognizing that he’s not an adult. He’s very much a sixteen-year-old kid that people are expecting to be the next Iron Man. That makes the essence of Spider-Man feel fresh and new even though it’s the core theme of the character. It’s something that is very admirable, that these movies keep finding ways to say, “With great power comes great responsibility,” without anyone ever needing to say those words out loud.

Yet director Jon Watts also knows how to balance that weighty theme with a fun, lightweight adventure. While some Marvel movies, such as Guardians of the Galaxy Vol. 2, are all about the jokes to the point that they obscure the pathos of its characters in favor of punchlines, Far From Home is admirably deft in how it can be completely irreverent one moment and wholeheartedly invested in Peter’s journey the next. Also, like its predecessor Spider-Man: Homecoming, there’s more to the story than just a superhero beat-em-up action and there are themes that relate to the real world. Because Far From Home does the work of putting character first and has such a strong actor in Holland, there’s room to include jokes about Spider-Man going to space.

In a way, Far From Home suffers slightly for the nimble work of its predecessor. Homecoming populated Peter’s world with such delightful high-school characters — not just MJ and Ned (Jacob Batalon), but new verisons of Flash Thompson (Tony Revorli) and Betty Brandt (Angourie Rice) alongside a sad-sack science teacher (Martin Starr), all three along for this trip to Europe — that Far From Home has a deep bench before it even get to the likes of Fury, Maria Hill (Cobie Smulders), Happy Hogan (Jon Favreau), and the ghost of Tony Stark. It’s not a literal ghost, but it’s Stark’s legacy that looms over Peter’s conscience. Stark has essentially taken the place of Uncle Ben as Spider-Man’s emotional motivator, a development that feels either organically inventive or a little cheap at times.

Watts direction is decently strong throughout. His ability to bring the chatty sense of personality into the movie’s action sequences works at moments. There are some fine ideas for Spider-Man in the action sequences, like a scene of a plainclothes Peter struggling to save Venice buildings with his webbing. While the Mysterio’s character-signature nightmare-like illusions that he puts on other characters bring a unique visual pop that the MCU gravely needs. It’s the movie’s most exciting physical confrontation that eschews building-smashing for strong surrealistic visuals, all of which Watts executes very well. Yet it’s also in the film’s finale that things, at times, seem to be going through the motions, playing out in the familiar MCU way. But what brings those moments up is the consistently wonderful cast, with Holland and Batalon continuing their lovely comic rapport, augmented by Zendaya’s deadpan charm. Gyllenhaal nails his character’s earnestness but also clearly enjoys a few moments that let him channel every exasperated-sigh, all the perfectionist diva directors he’s ever known. 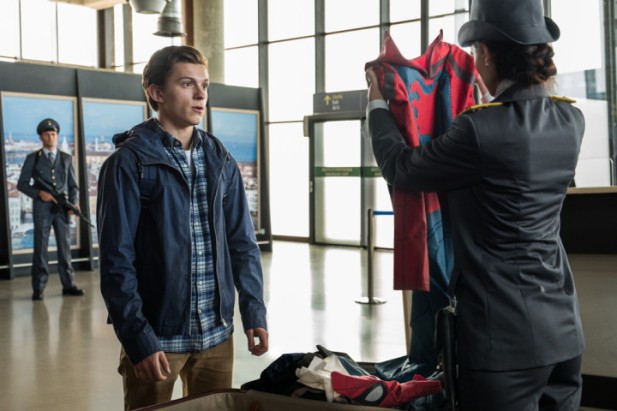 There are so many exciting things to talk about with Far From Home, many of which you will want to discuss with friends afterwards. You might be wondering though, is this better than Homecoming? As of now, I’d say it’s a slight step down. But they’re both movies that are a lot of fun, Tom Holland continues to kill it as Spider-Man, and Marvel Studios knows how to make the Spider-Man mythos feel original and distinct. Far From Home feels frequently like a charming teen road-trip comedy that occasionally turns into a superhero movie, and that’s in no way a negative. Though the script gets a little clunky at times, Spider-Man: Far From Home strives with its focus on character-based comedy and coming-of-age anxieties. And like the adoring crowds in Far From Home, I too hope Spider-Man is the new Iron Man. Because it means we’ll get over a decade worth of movies with him.