If not for a charming cast and some occasional moments of Richard Curtis’ signature British charm, Yesterday would be a complete waste of its clever premise — not to even mention the money is must have cost to license seventeen of The Beatles’ most famous songs. It’s an ingenious idea that has no idea how to pay off its own premise. Taking place in a world where no one but the protagonist remembers the music of The Beatles, there are so many interesting directions you could go with this premise, and yet Yesterday ignores all of them in favor of a romance that’s bland and uninspiring. A sweet but mindless exercise in suspending disbelief that’s an underwritten misfire; a studio-engineered crowd-pleaser so convinced that “All You Need Is Love” that it loses sight of some other essential factors along the way: Believable characters, elegant pacing, a script that develops an actual heart instead of just nodding its head to a steady drumbeat of Hallmark emotions. As you sit and watch the protagonist churn out Beatles songs as his own, you see that Yesterday has no love for The Beatles, their impact, or even their music. It’s a story about love and fame, and The Beatles are merely a means to an end, and they deserved much more.

Jack Malik (Himesh Patel) is a struggling singer-songwriter in a small town in England. He has the support of his best friend and manager Ellie (Lily James) and a few other friends, but no one is really interested in hearing his music and the lack of turnout makes Jack want to hang up his guitar. However, during a worldwide blackout that lasts for a mere twelve seconds, Jack is hit by a bus. When he awakens in the hospital and soon discovers that he’s the only person who remembers the music of The Beatles. The group has been wiped out of existence, but he knows most of their songs. He decides to pretend like The Beatles’ songs are his own, and as he becomes more successful and famous, he has to live with not only the guilt of his own fraud, but also how he’s ignored Ellie despite her obvious feelings for him. 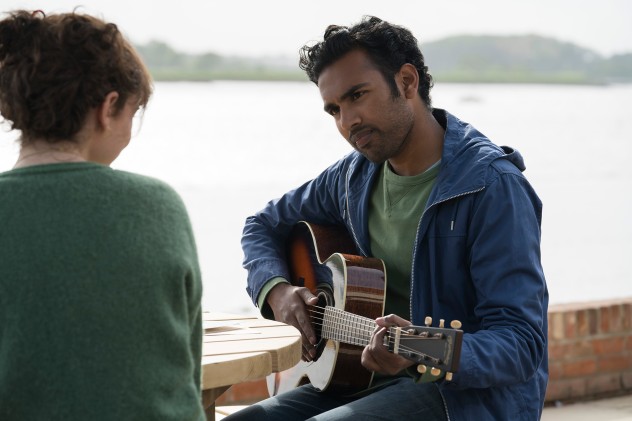 It’s a dream scenario that sets him up to be, well, bigger than Jesus. And it yields a few choice comic bits early on, like a scene in which Jack tries to sing “Let It Be” for his mom and dad (Meera Syal and Sanjeev Bhaskar), who prove distracted and unimpressed in the way only loving parents can. There’s a running gag built around Jack’s frequent Google searches, which reveal that The Beatles aren’t the only global phenomenon that’s been scrubbed from the history books. Director Danny Boyle working from a script by Richard Curtis, Yesterday never attempts to supply a rational explanation for these bizarre acts of pop-cultural deletion. It invites you to shrug your shoulders and surrender to the genial what-if absurdity of its premise.

If you’re hoping that Yesterday might grapple with, or show the slightest curiosity about, the idea of what might happen if someone (let alone someone of Indian heritage) introduced the Beatles’ extraordinary back catalogue into the modern cultural landscape, then you might need to readjust your expectations. Curtis, who’s essentially the Shakespeare of schmaltz, couldn’t possibly care less about how the absence of “The White Album” might have affected the last half century, or what it might feel like for contemporary music fans to be confronted with “Come Together” in the age of Coldplay. It treats the conceit as though it were merely a complication for the generic rom-com underneath. Despite having the key elements for an unusual star-is-born saga that flirts with potentially fascinating aspects of authorship and maybe the most epic case of imposter syndrome ever diagnosed, Yesterday is nothing more than a classic story about some dumb boy chasing his cheap dream instead of recognizing the reality that’s been staring him in the face the whole time.

For a story ostensibly designed as a tribute to The Beatles’ catalogue, it’s strange how patchily the songs are presented. Not necessarily by Jack, who indeed sings them well but the movie itself, which stages them so interchangeably and chops them up into such truncated, perfunctory bits, that you wonder how they could captivate a newcomer, let alone the entire world, in their present form. Yesterday leans so heavily on our affection for The Beatles’ music that it never allows that music to live, breathe and seduce us once again.

Yet throughout, Yesterday it’s seemingly far more concerned with Jack’s fame and his romance with Ellie, merely using the music of The Beatles as an easy shortcut to get Jack famous. The film also wants to convince us that The Beatles’ music is timeless so that a song like “Help!” would be just as popular today as it was in 1965, but then it wants to turn around and treat that same music as nothing more than a collection of catchy tunes. As Jack’s ruthless agent (Kate McKinnon, who, at times, feels like she’s in a different movie) says about her client, “He’s a product to me,” and Yesterday treats The Beatles’ music the same way. Yesterday is the cinematic equivalent of people who’s favorite Beatles album is “1”. You could make pretty much the same movie if Jack woke up into a world where only he remembered advertising jingles and became successful as an ad executive.

Yesterday does contain the occasional funny joke, some especially good ones at the expense of Ed Sheeran, who plays himself and plays a key role in Jack’s rising star. Sheeran is quite terrifically sly and self-effacing in what emerges as one of the film’s strongest performances. He plays two conflicting modes — frustration that he’s being surpassed, and genuine joy that this music is now out in the world — with a nuanced honesty the rest of the movie never approaches. It’s a small comfort in a film that never finds the payoffs that would make its premise worthwhile. It’s not a movie about the cost of art or even being oblivious to love. It’s about fame and getting the girl, and you don’t need The Beatles for that. At times sweet, but more of an underwritten, mindless exercise in suspending disbelief, Yesterday wastes The Beatles canon on a lukewarm, uninspired romance.