Dark Phoenix is the second attempt to bring the much famous “Dark Phoenix Saga” storyline to the silver screen, with both attempts having been written by Simon Kinberg, who now also directs this latest adaptation. But what the two have in common is that they seem to be at a loss with how to do the storyline any justice. In 2006’s X-Men: The Last Stand, a major problem was trying to do both Dark Phoenix and an adaptation of another huge X-Men storyline “The Cure,” and neither one really gets the attention it deserves. This time around, the key problem is that we simply don’t know the main character, Jean Grey (Sophie Turner), all that well enough to make this be a truly compelling story. In the comics, having Jean go dark and troubled meant something because she had been around since the beginning of the X-Men and that turn had a serious effect on her fellow mutants. Here, that connection doesn’t exist hardly at all and the result is a frustratingly muddled film that doesn’t know what it wants to be as it clumsily tries to weave in set pieces and ultimately sends off this saga of X-Men with a whimper.

The film opens with shades of Carrie in 1975: A red-haired young girl named Jean (Summer Fontana), who can read other people’s minds and move objects with her own, causes a grisly accident that leaves her orphaned and traumatized. She’s placed in the foster care of professor Charles Xavier (James McAvoy), who encourages her to learn to control her powers and use them for the good of all humanity. Flash-forward to 1992, with Jean (now Turner) firmly established as one of the professor’s famous X-Men. She is joined by her adoring boyfriend, Scott/Cyclops (Tye Sheridan), and the shapeshifting Raven (Jennifer Lawrence) and the scholarly Hank (Nicholas Hoult), who both occasionally revert to their respective blue-skinned forms of Mystique and Beast. Mutant approval ratings are soaring, thanks to Charles’ expert public-relations efforts, the latest of which is a dangerous X-Men mission to rescue a crew of astronauts from a deadly solar flare. But it’s during said recuse mission, Jean is hit with a cosmic force, but manages to survive and become more powerful as a result. However, the cosmic force carries with it a dark side, and as Jean’s childhood trauma starts to reappear, she starts hurting people, including her fellow X-Men. Which ends up fracturing the X-Men, some wanting to put her down, others wanting to save their friend. Meanwhile, aliens led by Vuk (Jessica Chastain) want to use Jean for her power. 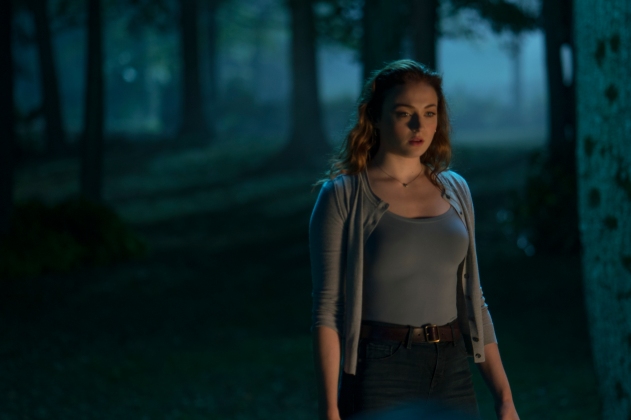 A big worry I had going into Dark Phoenix was that the audience doesn’t have an emotional investment in Jean or her relationships. The Jean Grey we know has been in one movie — X-Men: Apocalypse — and she was a supporting character then. What Dark Phoenix firmly settles is that adapting the Dark Phoenix Saga can’t simply be done in a one-off. It requires lead up, building up Jean Grey into an endearing character so that when she goes dark, the audience feels the tragedy of that downfall and feels that same emotional confusion and fracture as her fellow X-Men feel. None of that happens in Dark Phoenix. When Jean ends up killing a close friend, that loss doesn’t mean anything because those characters never interacted until this movie. When Beast wants to go out for revenge for that killing, it doesn’t matter because he and Jean don’t have a relationship beyond being fellow X-Men. There’s no clarity to the relationship, so nothing ever truly changes in a substantial way.

Throughout Dark Phoenix it urges you to both fear and fear for Jean, whose splintered psyche is literalized by the fiery cracks that open up on her face whenever the Phoenix begins to stir within her. Kinberg serves on the spooky-cheesy flashbacks and the Lady Macbeth references, and he gives Jean a number of arrogant, brazen and violent men to fend off along the way. They include Charles’ old metal-bending nemesis Magneto (a consistently great Michael Fassbender), but also Charles himself, whose kindness and idealism are shown to conceal a ruthlessly manipulative streak. “The women are always saving the men around here; you might want to think about changing the name to X-Women,” Raven snarls at one point, a crowd-pleasing line designed to showcase the movie’s feminist sincerity. But not even Turner, with her radiant screen presence and her ability to make strength and vulnerability seem shown all at once, can save Dark Phoenix from its own pitfalls.

I say all this with considerable affection for this long-running franchise, of which I’ve grown along with. And after its Phoenix-like resurgence in 2011 by X-Men: First Class and 2014 by X-Men: Days of Future Past it seemed to show strong promise. Their stories of powerful mutants joining forces to save humanity, the X-Men films clearly anticipated, and at times outclassed, the elaborate group dynamics of the Avengers franchise. Their finest action scenes have always been dazzling displays of teamwork in action, reminders that true collaboration requires that of harmonious interplay from both Storm’s lightning bolts and Wolverine’s claws, and that victory is often a matter of finesse rather than brute, sheer force.

In Dark Phoenix you can sense Kinberg trying to summon that same finesse, to disappointing ends. He does pull off one amusing action sequence, set aboard a fast-moving train and boosted by an enjoyably bombastic Hans Zimmer score. Unfortunately, he also tries to explain the mysteries of the Phoenix, for some reason, with a dead-on-arrival subplot involving the previously mentioned race of alien body snatchers, lead by a uncharacteristically lethargic Jessica Chastain. Her stagnant gaze, presumably meant to suggest otherworldly detachment, merely holds up a mirror to show the audience’s disappointed boredom.