Here are the quick movie reviews for Her Smell & Sunset.

In Her Smell, the unfortunately named new drama from Alex Ross Perry, Elisabeth Moss does something you almost never see in rock ‘n’ roll movies: She sucks all the cool, all the sexiness, all the glamour, all the romance out of a downward spiral into depravity. Her character, Becky Something, is the frontwoman of a grunge-rock trio that’s slowly falling out of the limelight. When we first meet Becky, it’s at the mic, where she’s still a star, devouring the devotion from her faithful fans. This is, as it turns out, a fleeting mirage of charisma. Because from the second she walks out of the spotlight, we see the real Becky, the one her colleagues and handlers see, the alcoholic diva riding a streak of belligerence. And Moss attacks the role with a fearless lack of vanity, daring to make this nosediving rock star not just unlikeable but downright irritating. 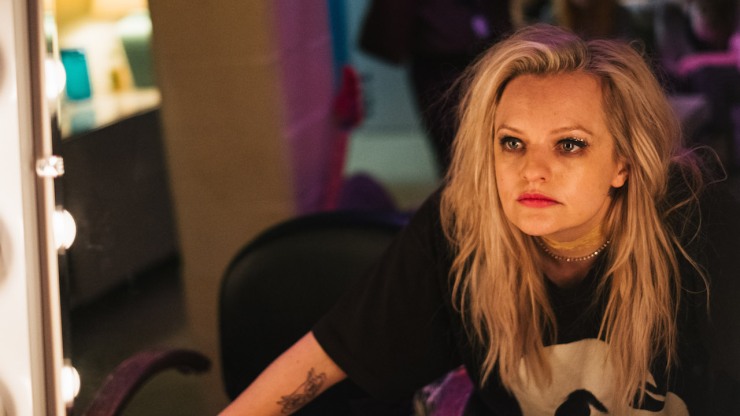 Elisabeth Moss in Her Smell

If writer-director Alex Ross Perry has a gift, it’s for orchestrating caustic confrontation, and for a while, that’s mainly what Her Smell offers, pretty impressively and at length. As the Cassavetes-esque, jolting confrontations that make up the first hour or so, set the environment oh-so well. But after that first hour, a massive shift pulls the rug out from under the movie and begins the redemption tale of it all. It’s in that second half where the mileage may vary for some, as it features an array of clichés, a small but bad child-actor performance and a resolution that feels all too hokey. But what stays consistent through it all is Elisabeth Moss, who makes all the highs and lows strongly engrossing, pulling us closer and closer through the gravitational pull of her performance. Show-biz stories like this always inspire speculation as to who the character is “really” supposed to be, and while Moss brings a little bit of Courtney Love to her performance, Becky Something feels like a completely organic and unique individual.

Set in Budapest in 1913, Sunset follows Írisz Leiter (Juli Jakab), a daughter of the city’s most prominent milliners, who’s returned to the famous hat shop once owned by her now deceased parents in hopes of getting a job, only to find herself thrown into circumstances that was left behind by her brother. But as this is unfolding, national tensions begin to arise around her. Scholars of the waning glory days of the Austro-Hungarian Empire will have a bit of an advantage when it comes to the historical background of the time. Budapest in the 1910s was a world of white-lace finery and horse-drawn carriages that was rivaled only by its sister city, Vienna, as the apex of European wealth and cultural refinement. The movie’s first image is of Írisz, her eyes hidden by the brim of an enormous hat she’s trying on at her parent’s former hat shop. The initial concealment of her gaze is telling; who this woman is and what she wants are among the movie’s most persistent mysteries.

Sunset unfolds in the same propulsive state of constant motion as applied to László Nemes’ previous film (which was also his debut), Son of Saul, which dragged its viewers through the crowded labyrinth of Auschwitz. Except Sunset is an easier movie to watch than Son of Saul, insofar as we cannot hear the machinery of mass murder grinding away relentlessly off-screen. But what does stay the same through the two films is the visual scheme. Shooting on gorgeously dusky 35mm, Nemes and his cinematographer Mátyás Erdély weave long, sinuous tracking shots around Írisz, often using shallow focus to isolate her at the center of the frame. Everywhere she goes she’s greeted like an intruder, as though she were a virus swimming through the blood stream of the Austro-Hungarian Empire, the rest of the world circling like a hostile community of white blood cells. Throughout Sunset, Nemes continuously orchestrates grand panoramas of chaotic activity, displaying his masterful blocking, with each scene more arrestingly immediate and disorienting than the next. 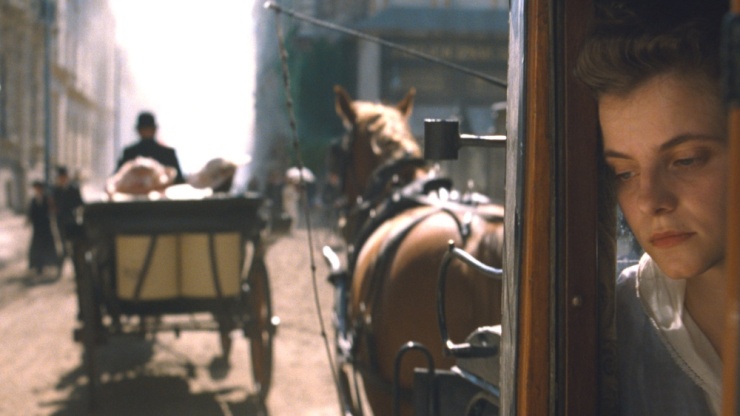 As we follow Írisz through bustling streets and afternoon garden parties into a shadowy underworld of crime and conspiracy, she is not merely chasing the truth about her inheritance; she is our witness to the last gasp of European luxury before it dissipates into the bloody maw of World War I. It’s a compelling thesis, though predicated on supporting arguments and scenes that either evaporate like smoke or strand the viewer in a thick cloud of metaphor. Sunset is mesmerizing with its exacting precision and maddening with its unfolding plot. Becoming, among things, a movie about the abuse and subjugation of women in any era, in times of peace as well as war.

Írisz is less a character than a single-minded avatar of pure determination. As a protagonist she’s someone who doesn’t fight back against the oppressive forces so much to prove oddly, unaffected by them. Sometimes immaculately dressed, sometimes disheveled and enveloped in sweat, Juli Jakub delivers a reserved but unrelentingly physical performance, anchored by a gaze that confronts every fresh horror with intense vulnerability and fierce determination. Throughout her performance, she slowly teaches you to watch the movie by watching her. As its the last time we see Írisz, in a long tracking shot, where she fixes the camera with a flinty stare that could be interpreted as a wink or a rebuke — or maybe a revelation. This woman, you realize, is neither a troublemaker nor a victim; she’s more like an expression of conscience. You never fear for Írisz in Sunset. You fear for the world she’s passed through and found sorely, tragically lacking.