In Climax, the camera twirls around, peering up and down at its doomed characters as they careen into the depths of a drug-induced frenzy, as hypnotic beats dominate the senses and the soundtrack. Gaspar Noé has served up another hardcore agape-horror film, one that is visually extraordinary and structurally and formally audacious. One that delivers nauseating effects of collapsing into a long bad trip, but no matter them, Noé’s remarkable psychedelic ride is his most focused achievement, a concise package of sizzling dance sequences and jolting developments that play like a slick mashup of the Step Up franchise and Salo, or the 120 Days of Sodom, all mixed through the cinematic magic of Noé’s provocative ways.

The plot is a pretty simple one. Noé first introduces his massive cast of characters —played by a diverse spectrum of first-time or nonprofessional actors, along with Sofia Boutella — through a montage of polite, lightly revealing talking-head interviews. It’s revealed to be 1996 (beyond the lack of phones this could have easily taken place today) and that it’s a country-crossing dance troupe they’re all auditioning for, though they might well as be lobbying for a position in a social experiment, which is, in some extreme sense, what Climax has in store for them. They end up convening at a rehearsal space and dormitory to practice their routine for an upcoming competition before kicking off a night of partying. For a while, believe it or not, it seems as if we are watching a Richard Linklater imitation, as the dancers break off into pairs for some crosscut conversations that lays out the ingrained interpersonal conflicts of their miniature society. Then someone spikes the Sangria with a powerful psychedelic, and the hangout vibe morphs, almost immediately, into pure, paranoid insanity.

While it doesn’t follow one specific arc, Climax delivers a dynamic between a handful of characters: Selva (Sofia Boutella), the stern manager of the group who’s at once keen on the hedonistic vibe and resentful of everyone, and Emmanuelle (Claude Gajan Maull), her energetic partner-in-crime and the mother of a small child (Vince Galliot Cumant) she has made the dubious decision to bring with her. Daddy the DJ (actual French DJ Kiddy Smile) keeps the beats going, while various other dancers share vulgar jokes and argue about nonsense while catching their breath. There’s a visible tension in the room, much of it stemming from the pouty Psyche (Thea Carla Schott), who resents everyone around her for unexplained reasons, and sexist men eying the girls in the room like candy. None of them receive backstories of much depth, but they’re irrelevant once the drugs come for all of them.

As the film progresses, so does the filmmaking ambition. From an astonishing long take of voguing dance throwdowns, Noé keeps rolling, following the characters through the room as they trade party banter and gossip. Each restless frame veering into the next with a sense of uncertainty. With the typical acrobatic intensity of cinematographer Benoît Debie as his vessel, Noé never allows a single frame to rest. In one astonishing shot, a woman falls to her knees in terror while another contorts her body into elegant shapes in the background, epitomizing Noé’s commitment to conjuring extreme emotional states across a full spectrum of possibilities. By the end, the frame has turned upside down and stays there, as if stuck in a permanent state of bewilderment. Yet Climax still shares much in common with the levitating camerawork of a previous Noé film, Enter the Void. But unlike that sprawling endeavor, this 96-minute odyssey feels like just the right length to encapsulate his talent for disorienting viewers while inviting them into his madcap intention of overtaking their senses. 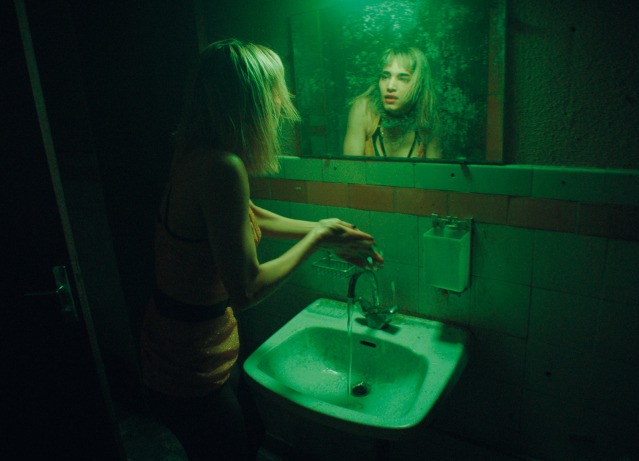 But Climax is also a celebration of living in the moment, or at least a tribute to the visceral intensity of trying to survive each new one, and Noé includes his own creative intentions in that ethos. The director embraces self-indulgence with a second credit sequence halfway through the movie, which includes his own name flashing across the screen in several different fonts, displaying the complete immersion into his intoxicating aesthetic. Various scenes are interrupted in an abrupt Godardian fashion, including the written assertion that “Life is a collective impossibility” and “Existence is a fleeting illusion.” In any other context, these declarations might cause eyerolls; in Climax, they make a weird sort of sense.

As Climax progressed, I began wondering if anyone has better captured the prolonged, disorienting anxiety of a truly bad drug trip. As Noé spirals his camera upside down, through the narrow passageways, and around the elaborate choreography by Nina McNeelly, he redeems and justifies his sensation-junkie insistence on stretching every scene into an endless, slow-motion death dance. There’s a method to his madness, to his repetitiveness, as Climax isn’t just 96 minutes of sustained sex, violence, and panic. It’s a rollercoaster ride of the bad vibrations. And as the screams echo through the hallways in this stirring odyssey, you’ll find yourself dissipating into a nightmare dreamscape of a brilliantly deranged microscopic vision of society in collapse.