In the sea of the many modern comic book superhero movies, Hellboy has a unique appeal. Mike Mignola’s comic book creation, a hard-drinking demon spawn who protects innocents from supernatural threats, could have been a gothic punchline on the big screen; instead, the notion of a devilish monster with good intentions came to vivid life in Guillermo del Toro’s imaginative 2004 film and its 2008 sequel, with Ron Perlman’s smarmy red-faced investigator giving the actor his finest creation. So much about those Hellboy films worked that director Neil Marshall’s reboot doesn’t focus on changing the formula so much as burying the rough edges in ample R-rated gore, while not really maintaining the underlying glee.

Where to begin in explaining the plot? How about many centuries ago, with King Arthur (oh yes, that King Arthur) slaying the evil blood queen Nimue (Milla Jovovich), slicing up her body and placing the pieces in boxes to be hidden across the land. Just to be clear, this all happens in just the first few minutes, folks. Cut to the present day, with Hellboy (David Harbour), as a member of the Bureau for the Paranormal Research and Defense, eventually having to fight off Nimue as the threat of her getting put back together and gathering her powers to wreak humanity rises. Once again to be clear, that is an extremely oversimplified explanation of the plot. So much more happens along the way, but to be honest who really cares, there’s really no need to clutter your brains with it all. 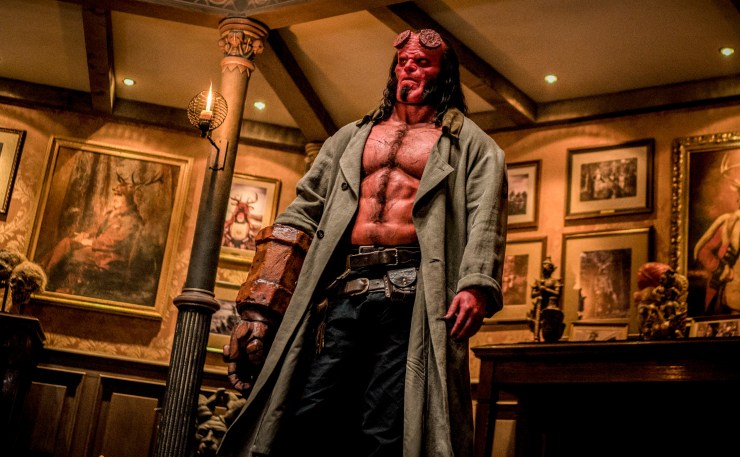 At the center of it all is the endlessly intriguing and appealing David Harbour, but he can only do so much. He ably steps into Perlman’s giant boots to play this hard-drinking demon spawn. It’s here that it’s a pleasure to see the Stranger Things star continue to get leading roles after a lifetime of strong supporting work. He even gets the opportunity to explore Hellboy’s sensitive side buried deep beneath his beefy, red exterior as the character discovers who he really is. Because of course, we need another origin story. Yet he’s increasingly called upon to contribute little more than sheer brute strength. But it’s a majority of the time where he’s only given groaners and puns to work with, which only hold him and the film itself back. Sure, Harbour gets a humorous moment or two, but decreasingly so as the movie staggers toward its messy ways and becomes only more narratively inept.

At the same time Hellboy is pretty ridiculous. But just because a movie is ridiculous and knows it’s ridiculous, that doesn’t automatically make its ridiculousness work. Hellboy stops being fun when it stops being funny, which it doesn’t take that long. And eventually, the film reaches a point of extreme, overindulgent insanity. But even that might have been more tolerable, though, it would help if the action sequences were choreographed and shot in a better manner. Instead, we get crude, CG brutality, choppily edited to the tune of overplayed rock anthems from the likes of Alice Cooper and Mötley Crüe.

Perhaps it’s appropriate that the 2019 version of Hellboy is busy to an exhausting degree, overloading itself to practically becoming crippled. It’s hard not to view this Hellboy as an overzealous attempt to revisit the content of del Toro’s films without matching their sophistication. Marshall’s version only summarizes the substance, shoving in a laughable, sentimental father-son subplot and falling short in giving any of the supporting characters much depth. As much as it attempts to inject fresh life into the franchise, this version of Hellboy will make you realize how much you need Guillermo del Toro in your life. And it doesn’t help that it just… will… not… end. As its bloated two-hour runtime became my most yawned-at time at the movies in a while (not even slightly kidding). This Hellboy even suggests optimistically that it’s the start of its own franchise, but it will probably end up stuck in purgatory instead, kind of like me having to sit through this movie.