Here are the quick movie reviews for Native Son and The Burial of Kojo.

Native Son transforms the classic protagonist from Richard Wright’s 1940 novel into a green-haired punk rocker, but first-time director Rashid Johnson’s harrowing adaptation is more faithful than it looks. The predicament of Bigger Thomas (Moonlight breakout Ashton Sanders), an impoverished young black man whose life falls apart under violent circumstances, delivers a compelling vessel for the simmering anger and frustration of racial persecution that suits the present moment. The most upsetting and unsettling aspect of this film is how little must change to give his plight a contemporary spin.

Revamping Wright’s novel via a modern adaptation written by Pulitzer Prize-winning playwright Suzan-Lori Parks, visual artist turned director Rashid Johnson has made a thunderous first impression. A24 produced, but distributed  by HBO, Native Son is less of a natural fit for the small screen — its values and textures are plainly cinematic. Though its route straight to the small screen is something of a loss since Johnson is working with acclaimed cinematographer Matthew Libatique, and together they’ve crafted a visually confident and distinctive film that carries a singular aesthetic which, despite Johnson’s background in conceptual art, remains unfussy and avoids feeling over-stylized.

Anyone who’s read or is familiar with Wright’s novel will be prepared for the dark, terrible places Native Son eventually goes. Those who haven’t might be shocked by its spiral into hopefulness and violence. It’s a hard-boiled conversation starter of a story and a film, both in its vividness and in its flaws. But at its center, as the noirish, punk-inspired antihero Bigger “Big” Thomas is Ashton Sanders, who dominates this entire film. Populating every scene and tasked with maneuvering Big through challenging territory, whether it be facing regular, irritating microaggressions or dealing with the fallout from the central act of brutality. He contorts his slender physique into a commanding swagger that transfixed me through every scene.

While as a feature debut, Native Son is an inarguable accomplishment, it also lacks some connective tissue between dramatic events. Setting aside Big’s family off and on throughout the film and under developing his romantic relationship with his girlfriend Bessie (Kiki Layne). But its flaws are easy to forgive as Johnson conjures up such an intoxicating atmosphere that both his imagery and the spellbinding performance from Sanders will haunt you regardless. But its when we reach the painful conclusion of Native Son, where Bigger’s journey into a minimalist showdown defined by a near-empty arena-like building solely populated by police officers and a black man running out of options. Putting our lead figure in closeup, Native Son recognizes that the legacy of the Bigger Thomas character as a terrified outcast at odds with the world around him, and uncertain if he’s a victim of persecution or his own rash judgment. The finale’s tragic images linger in the devastating possibility that the truth is somewhere in between, and impossible to sort out. Nearly 80 years after the book’s release, it’s the same sad story.

The Burial Of Kojo

When musicians turn to directing film, it doesn’t always workout. Ask anyone who’s seen the directing filmography’s of Madonna, Prince or Bob Dylan. But it more than works out with The Burial Of Kojo, written, directed and scored by Blitz Bazawule, a Ghanaian musician now based in New York who traveled back to his birth country to make this dazzling modern fable. The film opens with a simple, striking shot, that of a Volkswagen Beetle on a beach, burning as the tide laps its tires. The film’s narrator, Esi, speaking in English (the dialogue itself is mostly in Twi), speaks of her father, and of a “dream that is not a dream.” She guides the viewers over a village built on water, with wooden stilts holding up the houses. She says that her birth “was supposed to bring prosperity and good fortune to my family.” 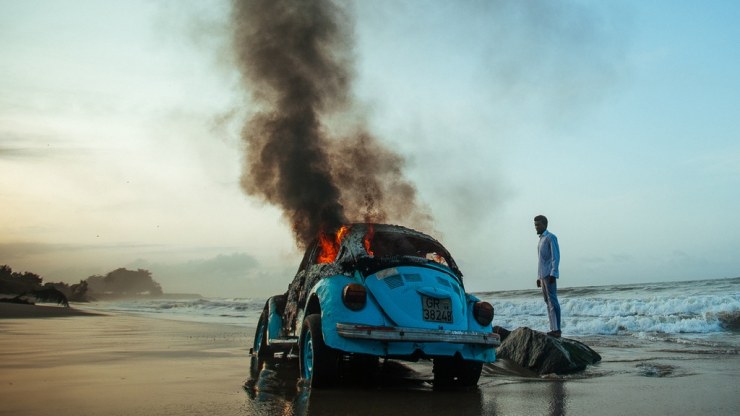 The majority of The Burial Of Kojo focuses on Esi as a young child trying to live up to those expectations. The action around her is enigmatic and fraught with mysticism. The film itself is a peaceful, meditative explosion of visual poetry. Thriving on the juxtaposition of the timeless and modern imagery. The frames are often suffused with monochromatic light, washing the characters in red or purple. And while overhead drone shots are becoming a too-easy convention and are at times boring in contemporary film, the use here is refreshingly different, capturing almost surrealistically colorful landscapes.

Blitz Bazawule certainly has a cinematic voice of his own, one with a very direct relation to musical rhythm. His way of establishing a view with one shot and then cut into a tighter view of the same shot has the poise of a great dance move. The entirety of the cutting is complemented by the music, which has flavors of Afrobeat and hip-hop but also more conventional cinematic scoring. In its brief runtime of an hour and twenty minutes, The Burial Of Kojo is a feast of nuance and beauty. It’s emotional punch came at a hit or miss level for me at times, yet its rich, warm retrospective feel came with its strong benefits. Showing bonds of love touched by regret and resentment with bold, lyrical touches.

Both films are available right now, Native Son on HBO and The Burial Of Kojo on Netflix.