In the modern age of movies, the term “epic” usually just means long, crowded and in some way grandiose. Birds of Passage, Cristina Gallego and Ciro Guerra’s follow-up to their stunning, hallucinogenic, Oscar-nominated Embrace of the Serpent, earns that label in a more honest and meticulous manner. Parts of the story are narrated by a blind singer, and overall the story itself upholds to legendary poet Ezra Pound’s definition of the epic, as “a poem containing history.” It’s about how the world changes with or without you, about how individual actions and forces of fate work in concert to bring glory and ruin to a hero and his family.

The history in question, divided into five “cantos” or chapters, involves the Colombian drug trade from the late 1960s to the early 1980s, but the film defies narco-drama clichés and superficial period atmosphere. Shot in the Guajira Desert of Colombia and set among the Wayuu people of northern Colombia (an Indigenous population whose language and customs survived the Spanish colonization and the rise of the modern nation-state), the film centers around how the Wayuu people become embroiled in the burgeoning Colombian drug trade. That latter subject is hardly untouched dramatic territory, but the perspective is everything: In favoring an indigenous perspective, grounding its crime-thriller tropes in the rich soil of native tradition, Birds of Passage achieves a poetic power and moral clarity all its own. 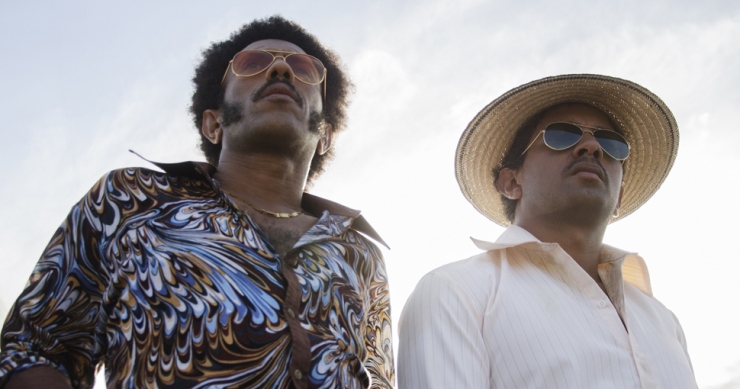 The story begins, in seemingly innocuous fashion, with a courtship and a wedding. Rapayet (José Acosta), an outsider or “alijuna” as the Wayuu say, wants to marry a beautiful Wayuu girl named Zaida (Natalia Reyes). And so he does, though the less-than-diligent manner in which he arranges her dowry — involving his unruly friend Moises (Jhon Narvaez) and a couple of weed-loving, communism-dissing American gringos — casts a cloud over their marriage from the outset. That cloud will grow and grow. “The spirits will warn me,” says Zaida’s mother, Úrsula (Carmiña Martínez), if her son-in-law should do anything to cause her daughter harm. And while the silently charismatic Rapayet is a peace-loving sort, he can’t avoid the pollutive association with Moises, whose increasingly unpredictable, trigger-happy ways can only bring chaos upon Rapayet and his loved ones.

And with Moises still in the picture, what could go wrong? Everything, of course. In Gaellego and Guerra’s hands, a tale of shady deals, doubles crosses and miscalculations becomes a domestic Shakspearian-like tragedy and a cultural apocalypse. Just as the money flows in, so do the guns, and the old codes of honor and reciprocation are corroded by greed and vanity. Rapayet, Zaida and their two children move into a grand villa that comes to symbolize both their worldly success and its grotesque absurdity. The house sits in the middle of a barren stretch of land, looking desolate and abandoned even when it’s newly built and full of people. 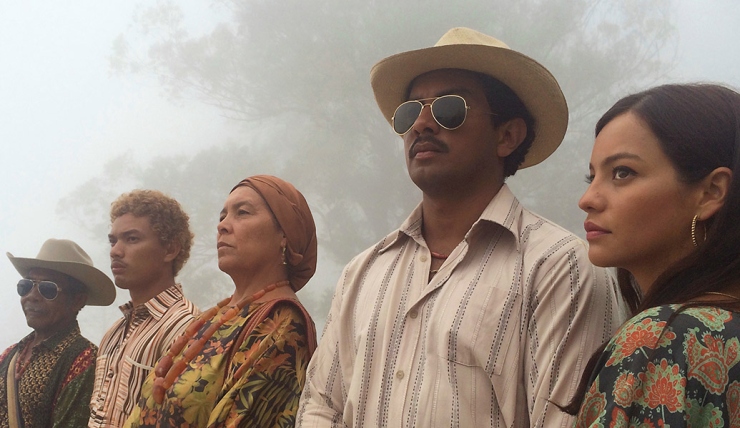 The lavish, sterile rooms are visited by some of the birds alluded to in the film’s title, omens of change and catastrophe. Birds of Passage, while clearly the result of long and careful research into the Wayuu people, doesn’t feel like an ethnographic document. Instead of stepping back to explain the beliefs and cultural practices of its characters, it drops you into the reality of their lives, trusting that both their humanity and their distinctiveness will be apparent, that they are no more fundamentally mysterious or noble than anyone else.

Though their marriage started the narrative and is at the center of the narrative, Zaida and Rapayet are not quite the protagonists of their own lives. The authentically tragic figure here, the one who secures the films epic scale, is Úrsula. Regal in her bearing and loyal in her commitment to being right, Úrsula is a woman whose actions are at once grounded in clear ethical principles and wholly catastrophic in their consequences. But Úrsula is not entirely to blame for the violence that consumes everyone around her. There are plenty of individual lapses that accelerate the destruction. Moises is impulsive; Rapayet can be passive; Ursula’s son Leonidas (Greider Meza) drifts toward wanton criminality, unbound from the discipline of tradition. Behind these actions are the half-invisible, lethally powerful forces of outsider expediency and Yankee appetite. The history this poem contains is not only the history of the Wayuu.