Tim Burton is a filmmaker that has taken his audiences into his funhouse of an imagination for decades. And with his live-action remake of Disney’s Dumbo, Burton plays with his legacy that he’s helped burnish for those decades, only to gleefully set it all ablaze. A film that is ho-hum until it takes a turn into the fascinatingly bizarre, Dumbo is a welcome declaration of artistic independence for Tim Burton, who continually strains against aesthetic and industrial restrictions. And if that wasn’t enough to inject into a lighthearted kids’ movie, Burton’s Dumbo remake is unmistakably a critique of entertainers who sell out to greedy corporations for the cash. Specifically, to Disney. Then at the same time you get the pleasure of watching him cut loose, which becomes the most unexpected pleasure of this entire film.

The original 1941 Dumbo is one of Disney’s simplest heart-tuggers, with its problematic racial stereotypes in all. It told the story of a wee circus elephant whose enormous flappy ears enable him to fly. This very straightforward story might not have seemed an obvious choice of an auteurist project, but at the same time the originals runtime comes in at just 64 minutes long. Giving the remakers both not a lot to work with, and a lot of creative freedom. Dumbo comes at a time where Disney is giving its endless number of animated movies the live-action makeover: The Jungle Book, The Lion King, Aladdin and on and on until they run out. But it’s Dumbo that soars, compared to its remake counterparts, as it becomes the first one to solidify itself completely as its own thing. 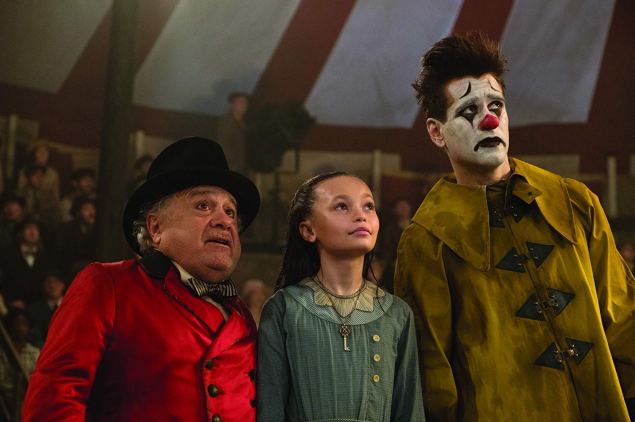 For the first half-hour of this new Dumbo, Burton seems to be on autopilot as he introduces the characters and sets the old-timey world. The story opens in 1919 at a down-and-out circus owned by Max Medici (a lively Danny DeVito), a ringmaster who presides over the film’s busy milling. By the time an earnest Colin Farrell enters as Holt, a trick rider turned disabled WWI veteran, the near two-hour running time feels a lot like a threat. But things pick up when baby Dumbo arrives. A pretty solid CGI creation, Dumbo is a digital cutie with massive ears that hang off each side of his head like heaping leather curtains. Like the original, this Dumbo doesn’t speak, which perhaps is why Burton focuses on his unnaturally large, expressive eyes. Those eyes moisten a lot, including when Holt’s drearily conceptualized and motherless children (the dull, Nico Parker and Finely Hobbins) comfort Dumbo after his protective mom is sent away.

Humans are secondary attractions in the 1941 version, but they crowd the remake. Most are just generic placeholders, but a few are strikingly brutal exploiters, none more so than V.A. Vandevere, a subversive invention. Played by Michael Keaton in full live-wire mode, Vandevere is a stereotypical rich snob screen villain. Keaton makes the character more memorable than most anyone here; Vandevere seems to dangerously pop. What makes him particularly arresting though, is that he owns a sprawling, impersonal amusement park called “Dreamland” that is filled with menace and with attractions, all together suggesting a bizarro world Disneyland. The subversive nature of Dumbo is an element that helps this film stand out. Burton takes a self-referential look to a startling level through the representation of its Walt Disney-style impresario (Vandevere) — who speaks of magic and mystique — and then by lighting the whole shebang on fire.

By the time Holt is galloping through flames and Vandevere is threatening to kill Dumbo’s mom, this film has gone enjoyably bonkers. The animals are roaring, the workers are revolting, and Burton has merrily turned what could have been another remake into something genuinely different and surprising. The production design from Rick Heinrichs and the costume design from Colleen Atwood are phenomenal. The beautifully bittersweet score from Danny Elfman and the visuals Tim Burton and cinematographer Ben Davis make (especially the pink-elephant bubble sequence) establish Dumbo as a standout in a potent way. But it’s Burton’s injection of a little subversion into the film that brings back some of that outsider spirit that’s stayed with him all these decades. As it’s through Holt’s flame galloping that Vandevere hollers, “You freak! What have you done!” In which Holt replies, “What they pay me for, sir. To put on a show.” It’s a quippy throwaway line, but in the film’s context, it’s a lot more.