From Watchmen to The Incredibles to most of the Marvel Cinematic Universe, there have been plenty of movies set in a world where the general public knows about the existence of superheroes. The ordinary, everyday folk in these films refer to such enhanced individuals as “mutants” or “avengers,” but the terminology doesn’t really matter as the dynamic is always the same: Regardless of whether they’re thought to be threats or saviors, anyone in spandex is fundamentally separate from general society. Obviously, it’s never an even split, as power is an intrinsically unequal thing. Those who have it look down at the indistinctive masses they hope to help or exploit; those who don’t look up and feel as small as they might seem from above. Well probably, it’s hard to say. We seldomly get to see these stories from their perspective.

Perhaps that’s what makes Shazam! such an unexpected joy. It comes at a time where studios are seemingly shoving superhero films down the pipeline. Some are good, some are bad, most seem to be just okay. But Shazam! comes in and delivers a look at the genre in a different light and reconceives it at a more human level. It doesn’t break the mold so much as it plays with how flexible it can be. Affable, lively and at times brilliantly satirical, Shazam! to put it simply is a pretty fun ride. 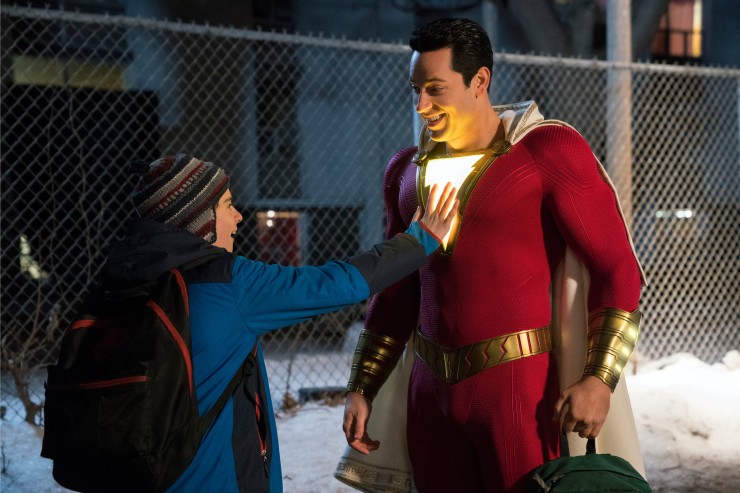 Our focal character, Billy Batson (Asher Angel), is a delinquent, obnoxious teenage nobody. As well as an orphan at that, and he’s not exactly the pure-hearted boy that is being looked for by a wizard (Djimon Hounsou) to pass his powers onto. And after some events Billy gains those powers, except those powers he inherits don’t come with instructions: All Billy knows is that when he says “shazam,” he turns into a swole adult man (Zachary Levi), who’s seemingly permanently sewn into a flashy red suit. From that moment on, Shazam! is extremely enjoyable, even if Billy is so caught up with his superhero wish-fulfillment that he doesn’t recognize how he’s on the cusp of realizing the only dream that’s ever kept him up a night: Having a family. And the family is this film’s secret to success. As they all bring their own flare to their home.

But it’s Freddy Freeman (Jack Dylan Glazer) who really connects with Billy. A sarcastic, disabled superhero super-fan who’s sadly in touch with who he is in the world, Freddy would give anything to be Shazam, and Glazer beautifully conveys the bittersweet pleasures of second-hand excitement. As Shazam is still the coolest thing that’s ever happened to him, even if it didn’t happen to him. The chemistry between Glazer and both versions of Billy is off the charts, but its particularly his chemistry with Zachary Levi that steals the whole show. Levi as well is a standout, his body language alone is constantly inventive. As he plays a young teen who still isn’t used to a grown man’s body, let alone a superhero’s. He captures the teenage-like possession of his body expertly. Shazam! though isn’t perfect. David F. Sandberg’s direction is constantly character motivated even in all the action sequences, but it’s the climatic action-filled finale that runs way too long. Though the small scale is to its favor, it still hits points of dragging on. Which is much like the runtime itself, coming in at a staggering 132 minutes. The film’s villain as well isn’t much. They attempt to give him the screen time and focus, but he’s still ultimately generic and dull. And his sidekicks who are the ones who truly give him his power, the Seven Deadly Sins, all look like your bargain-basement CG creatures and don’t do him or the movie much favors.

Even though Shazam! still at times sees the same pitfalls of the superhero genre, it as well brings a uniquely attuned look how the existence of superheroes would confront regular people with their own perceived weaknesses. It’s an idea that the film grabs and gradually turns inside out; everyone feels taunted by their own potential, even as no one has the ability to fulfill it on their own. There are numerous films about the magic of family, but each time Billy yells “Shazam!,” we’re reminded of something that our villain hears on a elevator TV: “Family is more than just a word.” A lot more, it turns out.