DISCLAIMER: The shots aren’t necessarily ranked on the overall cinematography of the entire film, as all 18 that are mentioned are great works, but more on the singular shots themselves, from the aspects of the shot such as the shot composition, the mise en scène or simply the beautiful nature of the image. Also I wanted to put Robbie Ryan’s work from The Favourite on the list, but couldn’t find a still for the particular shot. So just consider him an honorable mention. As well the format and camera’s stated with each shot are the ones used for that particular shot (to the best of my ability), not the entire film, as many of the films talked about used multiple formats and multiple cameras.

SPOILER WARNING: Some of the shots and commentary about them, spoil some of the films, so here’s your warning!

I won’t deny, I initially wanted to take a shot from the insane halo-jump sequence, but couldn’t find a good quality still of it. But even with that being said, this particular shot is still stunning and purely a beautiful image all its own.

Film: A Star is Born

It’s the shot that’s composition encapsulates the story of the film perfectly. As we see Gaga’s character, Ally, thrusted into the spotlight and Cooper’s character, Jackson, fading away from it. All of it as well, being lit with Jackson’s signature color, red, and showing the passing of the torch of stardom. 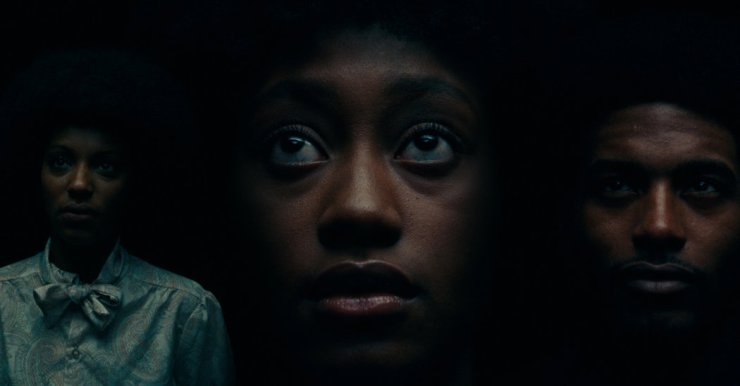 It’s another shot that encapsulates the film its in entirety. As we see in this shot in the film, while we are hearing an emotionally charged speech about racial inequality. We then cut back and forth between the speech and these angelic looks at the faces in crowd, showing the everyday people that are constantly affected by such injustice and inequality.

It’s a sequence in the film where we see Colin Farrell’s politician character, Jack Mulligan, having a heated conversation in the car. Except the entire time, the camera is mounted on the hood of the car and slowly floating from one-side to the other. It’s a sequence that displays in a strong storytelling device, the haves and have nots, as we watch the car traveling from the lower-income areas of Chicago to the extreme affluent neighborhoods in mere minutes. A shot that captures the menace of Tilda Swinton’s, Madame Blanc, over Dakota Johnson’s, Susie. It’s Mukdeeprom’s use of the split diopter here that is magnificent and is one of the many closeups in Suspiria, that are wholly character-motivated.

The Rider is a film about masculinity and recovery and this shot captures that in incredible beauty. The Rider tells the story of Brady, a young rodeo cowboy recovering from the news that he can’t compete anymore after suffering from a major injury. And he recovers through his love of horses and his love of training them, and this shot shows his therapy perfectly.

Film: The Ballad of Buster Scruggs

Bruno Delbonnel was giving the task of shooting an anthology film, and through all the six vignettes his stamp is always there. And with this shot in particular from the vignette “All Gold Canyon”, is one of the many that deals with greed. And it’s the shot above, that reveals a valley, where every shade of green pops in a soaring manner. Possibly capturing the psyche of  our lead character, as his mind is always on the prize. 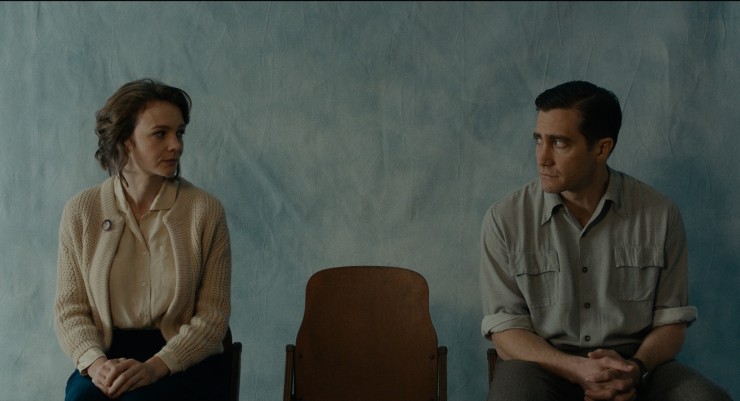 One of the many shots that display the stately composition of Diego García and Paul Dano (in his directorial debut here). This is one of the final shots of Wildlife. It’s a shot that carries a lot of weight in context. It takes place after the two subjects in the frame have gone through a familial crisis and divorced because of it. And it’s in this moment, where the calm, stately composition displays the steady separation between the two. It shows the two parents sharing a quick glance and setting aside there differences for this one moment for what truly matters, their son.

Benoît Debie does a lot with light from fire in this film and in the films opening minutes you’re introduced to this shot. A shot of the titular brothers walking away from their own destruction, barley escaping the dangerous line they constantly walk through the rest of the runtime to follow.

The second to last shot of Zama, was one that stood with me for much time. Its a shot that mixes lively vibrant green with the most lifeless of a body. It’s a shot, that after you’ve witnessed what our title character has been dragged through, holds a lot of lingering power. As you sit with the ultimate demise of Don Diego de Zama.

A portrait of soullessness that’s only stopped with intervals of a dying heart, Vice crescendos in a Shakespearean fashion up to Dick Cheney’s heart replacement and caps with this shot. An image of a cold and black heart, that, yes, it’s on the nose. Yet it works oh-so well.

Film: You Were Never Really Here

For a film that deals with PTSD immensely, this shot is a landmark in the arc of the lead character, Joe. It’s a shot where we see Joe laying to rest not only a loved one, but hopefully his inner-demons. It’s a moment that is visually poetic and a moment of hopeful yearning for the audience. And it’s a shot that becomes only more powerful when you combine it with the films incredible ending. 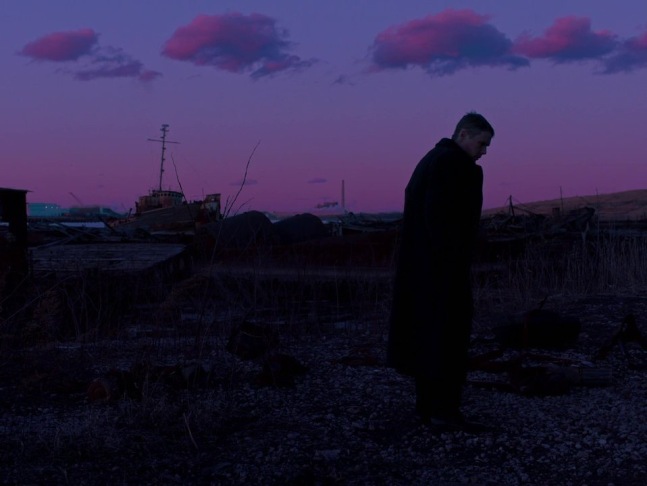 The entirety of the cinematography in First Reformed come from heavy influence from transcendental cinema, from the likes of filmmakers like Bergman, Bresson and Dreyer. The minimalism in the cinematography of First Reformed, features very few moments of camera movement and a majority of toned-down colors. And it’s this shot that is one of two moments of powerful color. This is a film that deals heavily with environmental issues, so it’s this shot that becomes a moment of strong resonance, being that the colors seen are completely caused by pollution.

A film that displays a character that is largely overlooked in so many stories. Roma’s lead character, Cleo, is a maid/nanny for an upper middle-class family, and her embodiment of genuine nurture can be encapsulated in this shot. As we see the family hugging each other after a moment of fearful despair, with that the opening hole between them filled by a bold reflection of the everlasting sun.

First Man truly is full of so many awe-inspiring shots to choose from, the obvious one that many have, and are talking about is the Wizard of Oz-like reveal of the moon’s surface. Which is as well the first moment where the film makes its one of many format changes, to 65mm IMAX. And that shot is undeniably great and quite breathtaking, but it’s this one I feel is not getting enough credit. It’s a moment where we’re still in super 16mm, and mixed with the phenomenal in-camera visual effects work. It’s a shot that takes the breath away in a moment of shire awe of what mankind has just done.

Format: Shot on 8K, Post-production was done in 4K

A film that captures the essence of revered painter Vincent Van Gogh. It’s a film that transports us to the fields with Van Gogh as we watch him make magic out of the landscape. And it’s this shot that treats Van Gogh’s face (Willem Dafoe) like one with the landscape, setting his face as the true landscape that the sun must set on. 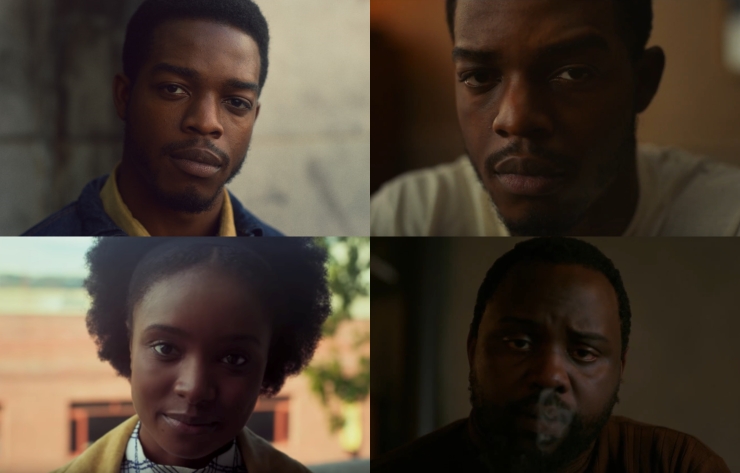 Film: If Beale Street Could Talk

Yes, I cheated a bit here, as I’ve decided to give this spot to two different moments (the shots go together top to bottom) that display the ingenious closeups that James Laxton captures. These are two moments that capture the everlasting beauty of the human face, that forces it’s audience to almost adjust their way of seeing for these moments. These are shots that capture the glowing warmth of If Beale Street Could Talk, they capture the brilliance of the films interweaving of the personal and political.

A shot that truly took my breath away the exact opposite way First Man’s shots did, this shot from Hereditary is far and away the most tense shot of the year. The way this shot holds for such a period of time pushes you to a point of almost yelling at the screen. The way it hides a certain subject in the frame forcing your eye to go looking, and once you find it you are then locked in the most arresting tension that you begin to feel it in your chest. The way Pawel Pogorzelski plays with shadow here, is a true masterwork and plays its part of making this shot the best shot of 2018.